In Densetsu no Starfy 4, Starfy's version of the Pufftop Clothes resembles Papa Star's clothes, but with a small white section where the gold buttons are instead of a blue section. 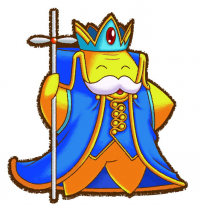 Artwork from Densetsu no Starfy 4

In this game, he does not appear during the story, but he does make a cameo in some of Pufftop's levels. In the castle's inside levels, There are some silver statues of Ronk, Papes, Snips, or all three. If Starly attacks some of these statues, she will get some Pearls and the statues will transform into a golden Papa Star statue.