Mario is a Nintendo character from the Mario franchise. He is the official mascot of Nintendo who has starred in many games and he is also considered to be a representation of video games in general.

In the Super Smash Bros. series

Mario made a cameo appearance in the fifth chapter of the Densetsu no Starfy R manga, Holy Place of Otaku, Viva! Akiba!! where he is seen in a manga shop called "Manga Spring" (Japanese: まんがの泉) in Akiunabara under the name "Sawarayukio" (Japanese: サワラユキオ) with other characters like Tom Nook. 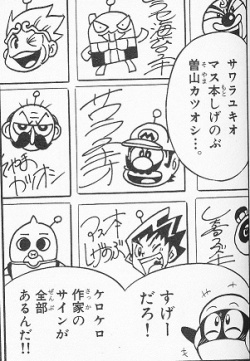