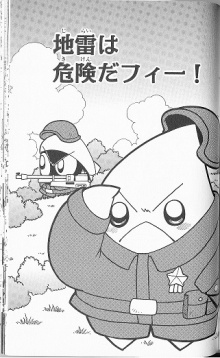 Mines are Dangerous Fii! (Japanese: 地雷は危険だフィー!,Jirai ha Kikenda Fī!) is the tenth chapter of the second volume of the Densetsu no Starfy manga illustrated by Yumiko Sudō.

Starfy and Moe are seen on top of a mountain. They are searching for Ogura. Starfy starts to smell something tasty. Starfy and Moe decide to search in the town where the smell is coming from. The town appears to be empty, but Starfy and Moe find a house with a door that was left open. They go inside and see a table full of food. Starfy does not want to steal the food, but Moe tells him they can because Starfy already got it messy from drooling on it. Moe looks away and finds a small bank. Starfy tells Moe they shouldn't take it, but Moe drools on it and says he got it messy.

Meanwhile, The Squirts, the Hokwi Group, Sir Hokwi, and some Taruika are on a mountain near the town Starfy and Moe are in. They are discussing what to do about the land mines that have been placed in the town by Ogura. Sir Hokwi says the Hokwi Group will take care of it. Sir Hokwi asks if all the town's people have safely evacuated. One of the Hokwi members tells him they have. Sir Hokwi looks through binoculars to make sure. He sees Starfy through the house's window.

Starfy is about to eat a loaf of bread, but Sir Hokwi busts the window and flies in. Moe runs away with the bank. A Hokwi member grabs Starfy and tells him that area is full of land mines. Sir Hokwi tells the Hokwi member to take Starfy to safety. Moe overheard part of the conversation, but he misunderstands what they said and think Starfy's getting a death penalty. Moe decides to hide in the basement of the house.

Starfy and the Hokwi Group soon arrive at the basement. Both of the detectors are activated. Starfy and a Hokwi member run in, but Moe trips them over with a rope and runs off. Starfy and the Hokwi member realize the detectors are pointing in opposite directions, so they split up with the plan of Starfy finding Moe while the Hokwi Group gets the land mine. Hokwi busts a door open to find Moe. The Hokwi member realizes he has the wrong detector again and believes it got switched with land mine detector when he and Starfy tripped. Moe drops the money and runs off again. He passes by Starfy and stops. Moe yells at Starfy because he thought he got a death penalty. Starfy starts to cry and tells Moe he was really worried. Moe then wonders what the thing Starfy has is. Starfy tells him it's the metal detector, but he doesn't realize it's actually the land mine detector. Moe sees the detector pointing at a coin and jumps to it, but it's actually a land mine. Moe accidentally causes an explosion.