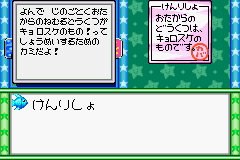 The Title Certificate (Japanese: けんりしょ) is an item in Densetsu no Starfy 3, found in the Jungle (Stage 5-2). Kabasonchou gives it to Starfy, Starly and Moe after they give him the Bear-san Rucksack. It is a certificate with a 'hippo' stamp to prove that the "sleeping treasure" cave belongs to Moe. Originally, Kabasonchou expected Moe to pay 10000000 Pearls for it but he couldn't afford it.