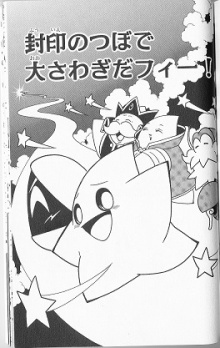 The Sealed Jar and the Big Disturbance Fii! (Japanese: 封印のつぼで 大さわぎだフィー!,Fuuin no Tsubo de Oo Sawagida Fī!) is the eleventh and final chapter of the second volume of the Densetsu no Starfy manga illustrated by Yumiko Sudō.

The chapter begins with Starfy and Moe in the sea, with Starfy holding the jar. Ogura has gone missing and Starfy comments that he is nowhere to be seen. Starfy starts to worry whether they are ever going to be able to trap him in the jar.

Moe suddenly sees something that surprises him. He spots a flying star-shaped object called the Pufftop Vehicle (Japanese: テンカイの乗り物). Starfy is surprised to see it and pops out of the water to find that a Pufftop Guard is riding it while holding a longer jar with closed eyes. Starfy asks if it is a regular jar, and the Pufftop Guard says it isn't. Starfy then thinks that it's dangerous and writes 'do not touch (金)' on it with a marker.

Meanwhile, Ogura is watching Starfy and the Pufftop Guard and picks up on the fact that the longer jar might be dangerous. Ogura comes over and knocks it out of Starfy's hand. Moe grabs the jar in anger and tries to stop Ogura from using it but Ogura takes the cork out of the jar and it sucks up Starfy and the Pufftop Vehicle.

Starfy wakes up in the middle of a small island with a tree. He comments that it seems like Moe and the Pufftop Guard were not sucked up. Starfy sees some stepping stones in the water that lead to another island where the town from chapter eight of volume two, "With Wario, this is the Best Tag Team Fii!" is. He is shocked to see that the town is deserted but then he sees Ogura flying away laughing and has no choice but to chase after him with the Pufftop Vehicle.

He starts to think everyone was defeated by Ogura, so Starfy flies over to seven places to check including Gekojii's House, Lovely's Shop, Moe's House, Ootaruika's House, Lobber's Cave, Okonomiyaki Town and Kuriore's Iceberg as the last place. Starfy is sad because it seems to be true in the places he has visited, however, he still believes that Papa Star, Mama Star, Pufftop Guards and other members of his species are safe in Pufftop, so he uses the Pufftop Vehicle to fly over to Pufftop hoping they will be there.

Starfy finds someone, and is relieved to see that there is someone in Pufftop after all, but then it turns out to be Ogura who laughs at Starfy and this makes Starfy feel that everyone in Pufftop Palace is gone too. Starfy is frustrated at Ogura for what he thinks he has done and wants to trap him inside the jar again, but Ogura calls him a fool because he doesn't have one and knocks him into the ocean with his tail. Ogura then comments "I wish I could go back to life".

Starfy is about to fall into some spikes until suddenly a rope appears and drags him through a hole in the sky. It turns out that he was pulled out of the jar by Moe, who winks at Starfy. Starfy is surprised to see that everyone he was looking for are there to cheer him on and they are all glad that he is safe.

Moe and the Pufftop Guard explain that both Ogura and Starfy were sucked up by the long jar and Mama Star explains that the world inside the jar is similar to Starfy's world, but without any living things, to which Starfy replies that he didn't know that at all. Starfy feels honored that everyone is there for him, including Old Man Lobber who Starfy is close to. He seems to have recovered from his memory loss in chapter three of volume two, Nostalgic Reunion Fii! and he also explains that news has come in that Ogura has died. Starfy starts to cry hysterically but says that it is 'good everyone is unharmed'.

Old Man Lobber then says that Starfy wrote the wrong kanji for 'kin'. He should have wrote '禁', which means 'banned', instead of '金', which means money or gold. Old Man Lobber wants Starfy to redo his studying, so Starfy starts writing in a 'drill' book with an angry look on his face.