Big Squiddy (Kyodai Ika in Japan, literally Giant Squid), also known as Squiddy on Starfy.com, is the first boss fought in The Legendary Starfy. He is a giant squid with a stubborn temper who kidnapped Bunston after Starfy and Moe fell on his head, thinking he had done it. 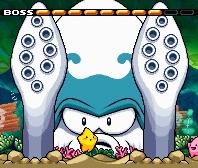 The player must on using Spicy Belly on his tentacles. The method is pretty easy.

“GYYAHH! Ahem… Heheh, sorry. Some people would find Big Squiddy scary. When I first saw this guy, I thought, “Eh, no big deal.” What? No, it’s true!”

JP Translation: “It’ll use its tentacles to grab you, throw you, and attack you. This thing’s the bully of the sea! It’s cause Big Squiddy nabbed Bunston that we had to chase after ‘em.”