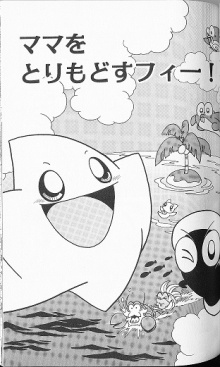 Get Mama Back Fii! (Japanese: ママを とりもどすフィー!, Mama o Torimodosu Fī) is the sixth chapter of the second volume of the Densetsu no Starfy manga illustrated by Yumiko Sudō.

Starfy is seen looking at the ocean in sadness as he misses Mama Star. Moe recalls Ogura kidnapping her before Starfy finds a bottle with a video tape inside. Moe jumps over to Starfy and tells him that it's a video letter. Starfy then brings out a box with a video camera and a video tape player which looks like the Shell Ataa from Densetsu no Starfy 2 and Densetsu no Starfy 3, only to kick the box into the ocean. Moe attacks Starfy and informs him that they use the camera to record a tape and throw the tape in the ocean instead. Moe plays the tape Starfy found, which turns out to be a message from Mama Star to Starfy. Mama Star informs him that she's in Ogura Castle. She reveals that she has the jar with her as well, but her message is interrupted by Ogura. Ogura attacks Mama Star before the tape stops. Starfy starts to cry, but Moe grabs him and runs while telling him he knows where Ogura Castle is.

Starfy and Moe soon reach a sign pointing to where Ogura Castle is. They head that way and find a small rundown house. Moe realizes they're looking in the wrong direction and points at a tall and ominous castle. Starfy and Moe enter the castle. Moe hears a door creaking. He looks at the door and think it's a monster, but it turns out to be Starfy coming out of the bathroom. A nearby monitor turns on with Ogura laughing. Starfy gets mad and attempts to attack Ogura from the monitor. Moe sees a shadowy figure. The shadow jumps up to Starfy while Moe tries to warn him. Starfy turns and realizes it's Mama Star. She looks at Starfy viciously before slapping him. Ogura tells them that Mama Star's been brainwashed. Starfy decides he has no choice but to fight his mother. Moe covers his eyes as Starfy uses his Star Spin on Mama Star. Mama Star takes the attack and throws Starfy into a wall. Moe tries to rush to Starfy's side, but Mama Star stops him. Ogura believes victory is his, but then he notices it's suddenly gotten windy. He looks back and realizes it's actually Starfy using the jar to suck him up. Ogura attempts to escape, but it was too late and he sealed in the jar once again. Mama Star returns to normal as the three of them cheer.

Soon Starfy, Moe, and Mama Star are seen recording tape messages, putting them in bottles, and tossing them into the sea. Once they're done, Moe realizes the jar is missing. Starfy then panics and believes he put it in one of the bottles.