From Starfy Wiki
(Redirected from Yogensho)
Jump to navigationJump to search 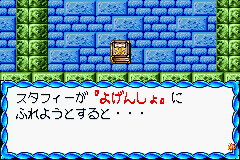 The first place Starfy can locate the prophecy is at the end of a labyrinth through the west-most door nearest to Moe. To solve the labyrinth Starfy must move through each door clockwise. (see directions below)

The moment that Starfy obtains the prophecy it disappears. A mysterious voice speaks to Starfy. Ogura seemingly appears out of nowhere and blows Starfy away. 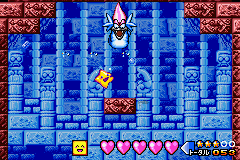 The second place Starfy can locate the prophecy is through the east-most door nearest to Moe. Through this door Starfy must move to the west-most area of the room while avoiding some Sand Snarks or stunning them with his Star Spin.

Starfy then finds Jojiro who isn't sure where the prophecy is, but insists that Starfy finds some medicine to heal his wounds. Jojiro opens a door that leads to a room that contains the Ointment. When Starfy returns to give Jojiro the Ointment, he says it seems there was a glistening book through the back door, and clears the way.

The back door leads to the second location of the prophecy.

As before, the moment that Starfy obtains the prophecy it disappears. A mysterious voice speaks to Starfy. Ogura seemingly appears out of nowhere and blows Starfy away.

These steps must be taken after completing 'Location 1' and 'Location 2'. From the green platforms swim north-east and return to find Old Man Lobber. Old Man Lobber asks if Starfy found the prophecy, and Starfy tells him that he had a vision of a demon. Old Man Lobber says that he cannot find Moe. Immediately afterwards, the mysterious voice can be heard again, and Ogura appears to blow Old Man Lobber and Starfy away.

Starfy is taken away to a large vertical room. Starfy can climb it with his Turbo Swim ability, and the help of some mid-air spheres and platforms. In the next room Starfy meets Old Man Lobber again, who asks if Starfy arrived safely and if he can look for Moe.

Starfy must talk to Rarako through a door next to two waterfalls. This makes three clams appears in the previous area. (locations below) The first one that Starfy speaks to is always Shorosuke, who says that he/she is hiding from Rarako. The second one that Starfy speaks to is always Chorosuke, who tells Starfy to stop it because he's hiding so Rarako doesn't eat him. The final clam is Moe, who is annoyed that Starfy didn't spot him to begin with and runs off to confront Rarako.

Moe is frightened of Rarako. Rarako thinks Moe looks delicious and gives Starfy what he was looking for - the prophecy to thank him. Moe eventually escapes and Old Man Lobber finally gets to read the book. Moe is excited regarding the legends of the prophecy, though it seems that he spoke too soon as Ogura appears to blow Starfy, Moe and Old Man Lobber away.

Starfy and Moe with the jar and prophecy

Following on from the events described in 'Location 1-3', Starfy is brought to the boss room with Doppel and Ogura. Ogura brings Doppel to his full power and vanishes. After Starfy defeats Doppel, Ogura leaves behind the jar and the prophecy, seemingly to allow Starfy and others to challenge him for the showdown in Pufftop. 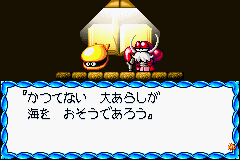 According to the prophecy, a large storm never seen before would hit the sea. The demon Ogura would go on a rampage until a hero appears to hunt down Ogura's minions one after the other.

Below are Japanese text extracts from the prophecy.

In the past, a great storm
engulfed the ocean.
It was the work of a terrible
monster called Ogura, who
caused widespread havoc.
However, a brave hero
appeared in the sea that was
ruled by Ogura.
The hero overcame Ogura's
challenges one by one, before
eventually cornering him.
But then, Ogura escaped and
took over Pufftop.


Moe:
Hehehe...
This hero must be me!
And Ogura must be that guy!

It seemed that no matter how
many times Ogura was defeated,
he would always return.
Even the hero was not able
to truly defeat him.

Old Man Lobber:
Any further pages are too
dirty to read! It must be
the work of Ogura.

Moe
But it was just gettin' good!
Hey, my servant, Starf!! You
got anything that could help?

Old Man Lobber:
Starfy, a servant?
Hohoho... It seems you two
should head to Pufftop.
If you take the Prophecy to the
top of the temple and wait,
a messanger should come.


Moe:
Just leave it to me!
I'm the hero after all!