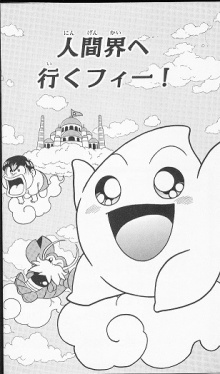 Going to the Human World Fii! (Japanese: 人間界へ行くフィー!, Ningen Kai he Iku Fī!) is the first chapter of the first volume of the Densetsu no Starfy manga illustrated by Yumiko Sudō.

The chapter begins somewhere in Pufftop with Ogura trying to put Old Man Lobber in his mouth and Old Man Lobber asking for help from Starfy. Starfy jumps across the clouds to rescue Old Man Lobber and uses his Star Spin attack on Ogura, rescuing him. Just after, however, a fish monster tries to attack Starfy, so Starfy goes into its mouth but it ends up biting him. Starfy is stuck in the monster's mouth and he begins to wonder who is going to protect the kingdom if he dies. He then falls unconscious.

Starfy tells Old Man Lobber something and he begins to look in a mirror but he throws the mirror away, breaking it and attacks Starfy with his claw. Starfy gets some sunglasses out of his sunglasses collection, commenting that it is too peaceful in Pufftop to the extent that it's boring. He wears some black sunglasses and Old Man Lobber shouts at him, suggesting that it wasn't always peaceful. Old Man Lobber comments that he was attacked in the old days and that something during that time has been sealed in the jar. He states that a young king had sealed the jar and had died in the battle. Starfy comments that it is an important jar and Old Man Lobber compliments Starfy for saying something nice but regardless of this Starfy puts the jar through the window and it comes falling through the sky towards the Human World.

Old Man Lobber is angry and says that they must retrieve the jar and he forces Starfy to do some push-ups. Starfy holds on to Old Man Lobber's claw and they both jump off Pufftop and fall towards the Human World.

In the Human World, a boy named Takeo is looking at the Game Boy Advance he finally bought and thinks Rumi-chan would surely like it if he showed it her. Takeo had saved up his pocket money to be able to afford it. Suddenly however, the jar falls straight into his hands and he drops the Game Boy Advance, breaking it. Takeo sees a shooting star fall from the sky, so he wishes that his Game Boy Advance gets fixed but then the shooting star falls into Takeo's face and is revealed to be Starfy. Old Man Lobber later falls on to Takeo's face and is happy that Takeo caught the jar but Takeo starts to cry. Starfy says that he will transform into a game console for Takeo. Takeo begins to think that Starfy and Old Man Lobber are robots and wonders if Starfy has a built in games console.

Rumi-chan says that she saw something 'awesome' a while ago. Her friend asks what and Rumi-chan replies that she saw a creature like a shooting star fall somewhere. Her friend replies that she also saw it. Takeo says that he is a friend of that creature, shocking Rumi-chan who asks if he is really. Rumi-chan, waving goodbye to Takeo asks him if he will introduce Starfy to her. Takeo replies that he will and then starts running away with the jar, heading into the toilet, worrying that Starfy and Old Man Lobber will come for the jar. Takeo goes to the rooftop and finds Starfy and Old Man Lobber there. He stands on them again, annoying Starfy who has had enough of being stepped on. Old Man Lobber says he and Starfy are not to become friends with Takeo but Takeo says he will break the jar if they don't become friends.