“Listen up, Nerd Nugget! Strength is everything! And power is strength! So power is... Everything too, I guess... Whatever! I have the power to take over this galaxy! Once Bunston is mine. I will be invincible... And won't that be fun... HARR HARRRRR! Prince Bunston! If you value your precious planet, you will bow before me! And if not... Kiss your home good-bye... HARRR HARRRRR!”
—Mashtooth, The Legendary Starfy

Mashtooth (Daīru in Japan, possibly Daiiru, but a common, possibly false romanization is Dire[1]) is the main villain and final boss of The Legendary Starfy.

He is the leader of the Daīru Pirate Squad, who consists of The Terrible Trio and underlings known as the Swabbies; that are divided into four groups, Land Swabbies, Sky Swabbies, Space Swabbies, Sea Swabbies.

Mashtooth was eventually defeated by Starfy, with the help of many others. He is a space pirate with a thick sword who attempted to conquer Planet Bunnera to absorb the powers of its inhabitants, in particular the prince of the Bunnerans, Bunston, and become the most powerful force in the galaxy. He has two forms when facing him. His second form is like a dragon.

Mashtooth is a power hungry tyrant that thinks power and strength is everything (which he states multiple times). He is shown to be very cruel since he attacked the inhabitants of Bunnera and stole their power just so he could rule the universe. He is shown to be short-tempered and will crush all that defy him. An example of this behavior is when he sent a Swabbie flying after the Swabbie objected to Mashtooth's plans believing that they weren't nice. He is shown to strike fear into his enemies as well as his minions since The Terrible Trio were scared about calling him and when a Swabbies told him that Bunston was in Pufftop he begged Mashtooth not to eat him.

Mega Mashtooth has some new abilities, including: 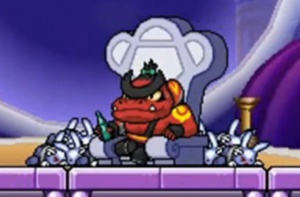 Mashtooth sitting in his chair

At first, Bunston tries to help Starfy by turning him into his Monstar transformation, but it ends up with Mashtooth having a forcefield. The player loses the Monstar fight, and then reverts back to the normal Starfy. To defeat him in his first form, the player can keep using Star Spin or Shooting Star on him. He attacks by charging. When the player gets his health down to five, he turns temporarily invincible, then disappears and starts to shoot lightning down the screen. The lightning shoots down either left or right, and is difficult to dodge. When the player gets him down to at least three health, he will try to inhale Starfy with his nose and rocks will fly into Starfy. If the player get caught in his nose, the player must keep pressing left and right on the D-pad in order to escape. If he or she doesn't get out in time, Mashtooth will swallow Starfy and the player must try it again. However, the best way to get away from him is to dash. A Star Spin can be used to break the rocks. 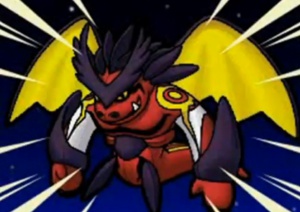 After the defeat of Mashtooth, he will inhale Bunston and absorb his powers, transforming Mashtooth into the much more powerful Mega Mashtooth (Strongest Daīru, さいきょうダイール in Japan); who grows huge yellow wings and becomes incredibly large. Mega Mashtooth, later flies off the screen and into space. Starfy, who is assumed to be unconscious remains unable to battle until the encouragement of The Terrible Trio, Moe, Bunston, and others gives Starfy the power to fight Mega Mashtooth.

The power invoked by Starfy's friends is so powerful that a large aura surrounds Starfy, allowing him to fly into space and attack Mega Mashtooth face to face. Mega Mashtooth will shoot even bigger bolts of lightning, however they are easier to dodge than last time. Once Starfy gives him a bit more damage, he'll fly into the background and start to throw meteors at Starfy. Using the Star Spin to deflect them has chance of hitting Mashtooth, doing damage. At even lower health, he'll do both attacks at the same time. Once Starfy defeats him, he will throw the moon of Bunnera at Starfy. The player must rapidly press Y to deflect it, or slide the Y button using the stylus. He'll throw it again, and this time it's even harder. If the player fails to deflect it, the moon will go into the background and destroy Starfy. Once Starfy deflects the moon again, it slams into Mashtooth, defeating him and then a cutscene ensues. Apparently, Mega Mashtooth and the meteors he throws have a 3D look.

Various sites have romanized ダイール in the The Legendary Starfy's Japanese title as "Dire" but this may be 'less correct' because of the lengthened イ, and because of the ル being pronounced as 'ru' or 'l' in ダイール (a better romanization for Dire would be ダイア). 'Dire' is an adjective applied to something that causes fear. In Volume 244 of Nintendo Power on page 73, in an interview with Hitoshi Yamagami, the Japanese name of the game is subtitled 'Dire Pirate Squad' too, however, it is possible that this was added by the editors and not Hitoshi Yamagami himself. On the Canadian Copyrights Database, the Japanese name of Mashtooth (as seen in its romanization of the Japanese name of The Legendary Starfy) is romanized as Daiiru.