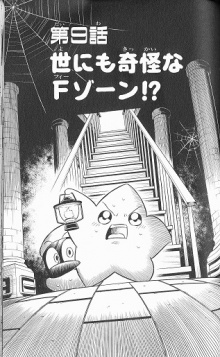 The chapter begins with Starfy with a black suit and hat sitting on a chair in Pufftop Palace. Starfy opens a door that should never be opened and Starfy and Moe begin to take the stairs that lead down to a place called the "F Zone", pronounced "Fee Zone", which is located deep under the ground of Pufftop Palace. Starfy uses the help of a lantern to be aware of his surroundings.

Moe is nervous that there might be ghosts but Starfy says they would be ghosts of Pufftop anyway, which Starfy thinks are cute. Starfy comes face to a face with a ghost scarier than he imagined and it frightens Starfy and Moe a lot who start running away.

Starfy stop at a falling spike trap and he discovers that he must avoid several of them to continue. Moe comes close to one and Starfy warns him that it's dangerous. A spike 'blade' comes down and splits a watermelon in half, and Starfy and Moe find out that Starly is eating some watermelons that were sliced in half by the spike traps. Starly asks Starfy if he had also come to eat watermelons.

Starfy and Moe carry on and Starly gets out a device to track their whereabouts in the F Zone. A ghost is behind her. Moe comes to an area with various coffins and one begins to open, frightening Moe, but it turns out there was a toilet inside and that Starfy just came in to use it. Starfy and Moe come to a closed door with a machine with levers near it. Moe tells Starfy that one gear for the machine is missing and Starfy tells him to leave it to him. Starfy goes to where the gear should fit and uses his Star Spin, acting as the gear.

Meanwhile, Starfy uses her device to see Starfy and Moe walking through the door that was closed. Starly presses a button and it makes Starfy drop to the bottom of a pit where spikes come to crush him. Starfy manages to hide between the gaps of the spikes. Starfy escapes and he and Moe come to a door that is locked by a padlock, chains and wooden planks. He and Moe try to unlock the door again. Starly warns them that it is no good to open it but Starfy is curious and goes ahead and opens it. Starfy falls through a trapdoor and there is nothing but the sky below it so Starfy falls through the air out of Pufftop Palace.

Later, Starfy in the black suit falls through the air and makes a hole in the floor, becoming injured. Upon getting up and sitting back in his chair, he asks "how was the story this time?", revealing that the whole thing was probably just a story (although if it is it's unclear how Starfy in the black suit fell through the air). He then falls of his chair flat down in the middle of the floor while Moe and Starly are eating watermelons.