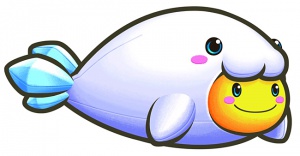 Starpedo (Kyugoma, キューゴマ in Japan) is one of Starfy's transformations that he gets from Bunston. The Transforming Stone for this power can be obtained in Chillydip Cove (Stage 3-3, 'Bunston's New Power'). It resembles a seal with a tail fin made of ice. Using the Y button creates a large icicle in front of the player that can shatter Deep Ice. This ability is known as Icy Spike.

Players can find the Icy Spike upgrade in Sogwood Forest's Area Secret 3 known as Super Icy Spike. The Super Icy Spike will enable the player character to go against faster moving currents. There are special blocks only Starpedo can hit which create rings that only Starpedo can swim through. Swimming through all of the rings will reward the player with Pearls. There is a time limit and failing to swim through all of the rings on time will not grant the player with Pearls, though the block can easily be hit again for another chance. 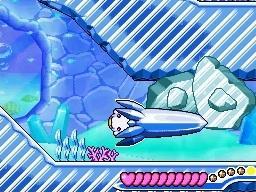 After the player first obtains Starpedo in Chillydip Cove (Stage 3-3), it becomes available as a costume in the 'Bunston' section of the Stuff. 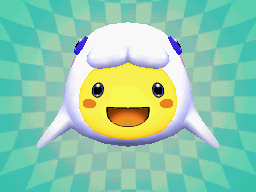