Kaimo is a rare mole enemy in Densetsu no Starfy 4. It wears a green hood over its head, patterned with white. It only appears in one level of Flourishing Desert (Stage 6-3) after beating the game once. Most of the time it hides underground, until Starfy or Starly approach it, where it will pop out of the ground to steal 15 Pearls from the player once at a time without actually causing any damage. If Starfy or Starly attack it with a Star Spin, it will stun Kaimo and release all of the stolen Pearls. Hitting it with a Star Spin once more will defeat it, though simply touching Kaimo while it is stunned will deal 30 health points to the player.

Kaimo is programmed to always return the right amount of Pearls even if this is theoretically too much for the game to handle at once. If Kaimo steals a large number of pearls, this will cause the game to lag slightly when too many big Pearls are released on to the screen. Under the right circumstances, it is possible to corrupt the screen and/or freeze the game when the game attempts to give out an excessive amount of Pearls. 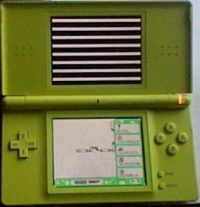 A corrupted screen shown after the game attempted to load 135 (15x9) Pearls at once.
Retrieved from "https://www.starfywiki.org/index.php?title=Kaimo&oldid=34289"
Categories: