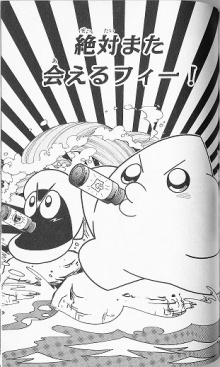 We'll Absolutely Meet Again Fii! (Japanese: 絶対また 会えるフィー!, Zettai Mata Aeru Fī) is the sixth chapter of the first volume of the Densetsu no Starfy manga illustrated by Yumiko Sudō. It follows on some time after the events of chapter 4 and possibly chapter 5, as Old Man Lobber had gone missing and Moe remembers he and Old Man Lobber being stuck in The Whale.

The chapter begins with Old Man Lobber on top of the waterfall calling Starfy's name. Starfy is excited to hear him and is relieved that he is alive. Starfy tries to use his Star Spin to climb the waterfall but he fails and falls back down again, disappointing Old Man Lobber who starts to walk away.

Starfy goes to lie to rest in a small cave with Moe and Starfy wonders where Old Man Lobber is now. Starfy finds Moe snoring heavily and Starfy finds him noisy. Suddenly, a boulder falls down and an earthquake occurs, forcing Starfy and Moe deeper into the cave. Starfy finds someone who he thinks might be Old Man Lobber, but it is in fact Gekojii holding a candle to light the area. He faces some rocks blocking the exit and Starfy and Moe watch as he drinks something called a "Power Up Drink" (Japanese: パワー アップ ドリンク) to smash the rocks away. Moe decides to face a rock and try to headbutt it himself, but he ends up hurting the top of his shell.

Moe picks up a photograph of a relative of Gekojii and he gets angry telling him not to touch it. Later, Starfy thinks about Old Man Lobber again and Moe calls Starfy an idiot, saying Old Man Lobber is dead. Starfy cries, saying Old Man Lobber is surely alive. Gekojii relates to Starfy, saying that he also has a loved one that he does not know his whereabouts. He picks up the photograph and tells them that his grandson has gone missing. He then introduces himself as Gekojii of a Buddhist Temple.

Gekojii opens a door that leads to a waterfall. Gekojii shares his story about what happened to his grandson with Starfy. He explains that half a year ago his grandson came while Gekojii was making dinner, but a Komorin suddenly appeared and took him to the top of the waterfall. Gekojii had used one of his Power Up Drinks to try to climb to the top of the waterfall but failed.

Gekojii doesn't think its possible to go and get his grandson but Starfy tries for himself and drinks one of the Power Up Drinks. He successfully uses his Star Spin to climb the waterfall all when it seemed like Starfy was going to fail, thanks to the help of another drink. Starfy, exhausted from climbing feels the air and notices a small entrance to a cold cave. Upon entering the cave, he finds Gekojii's grandson with his eyes shut, ill, suffering from the coldness.

Starfy drinks from the cup and feels power overflowing through his body. Starfy uses his Star Spin towards some rocks and but he ends up making a star-shaped crater in the ground.