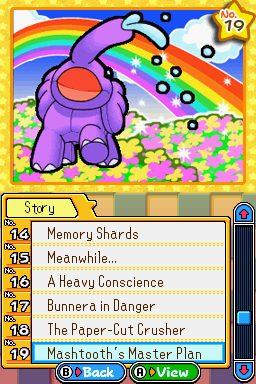 The cartoon takes place 'in a distant corner of space far from the cloudy lands of Pufftop...' in Planet Bunnera. It is revealed that the people of Planet Bunnera have a mysterious ability to shape-shift into different forms such as a butterfly, an elephant and a Monstar, and that the Bunnerans use this power all the time to help with their every-day lives.

Bunston and his parents are shown and the game reveals that Prince Bunston was born on this planet like all Bunnerans. Bunston's father, the king of Bunnera had a vision that one day Bunston would use the special powers he was born with to protect the Bunnerans.

Meanwhile, Mashtooth is absorbing the power of several Bunneran Soldiers with his sniffing attack. He says that the 'snack-sized' Bunnerans have 'given him a lot of power', but he still wants more to be the strongest in the galaxy. Mashtooth wonders where Bunston is and says 'what's taking so long?!' Bunston is spotted and runs away and is knocked into his spaceship by three Swabbies. Bunston hits a button that sends the ship flying away towards Pufftop, so Mashtooth orders his minions to get him and bring Bunston to him. Bunston's spaceship is shot down by The Terrible Trio's spaceship. After another hit, it shatters into seven Shards. Bunston falls right into Starfy's room in the Pufftop Palace, where Bunston begins to suffer from amnesia and questions who he is and where he came from.