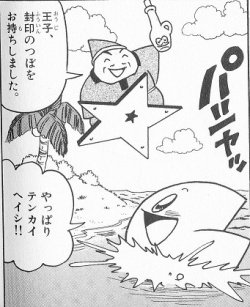 The Pufftop Vehicle (Japanese: テンカイの乗り物, Tenkai Vehicle) is a star-shaped vehicle with an icon of another star on its center that only appears in the eleventh and final chapter of the second volume of the Densetsu no Starfy manga illustrated by Yumiko Sudō — "The Sealed Jar and the Big Disturbance Fii!". It is possibly made of metal as small 'screws' are visible. It is capable of flying in the air and can be rode and used as a method of transport.

In the events of "The Sealed Jar and the Big Disturbance Fii!", a Pufftop Guard was seen riding this vehicle before going off it to see Starfy. When Starfy was sucked in to a long jar different to the typical jar Ogura is taken into, Starfy, the Pufftop Vehicle and Ogura went in it. Starfy was worried that everyone was defeated by Ogura, so he used the Pufftop Vehicle to fly to eight places, including Gekojii's House, Lovely's Shop, Moe's House, Ootaruika's House, Lobber's Cave, Okonomiyaki Town, Kuriore's Iceberg and lastly Pufftop. Nobody was there except Ogura, however, it was revealed that it is actually another world inside the jar where normally no living things exist.