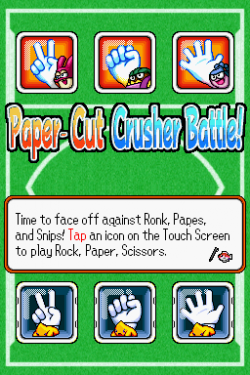 The start of the Paper-Cut Crusher Battle

The Paper-Cut Crusher Battle (Japanese: じゃんけんアタックバトル, Janken Attack Battle) is a game of rock-paper-scissors (stylized as "Rock, Paper, Scissors" in the English versions) that is the second boss battle in S.S. Logwater's area 4 (stage 7-4). It is kind of like a mingame, but it is played in the main game, and if the player loses, they will receive a Game Over. The player gets to play it after the first boss fight with The Terrible Trio in the same area, even if they have already cleared it. Even though after the first boss battle The Terrible Trio are wounded, with at least Snips on crutches, they are not out until the second boss fight.

The rules of the game are just like rock-paper-scissors, with "scissors" beating "paper", "paper" beating "rock", "rock" beating "scissors". If both teams throw the same hand, the turn ends without Starfy or The Terrible Trio taking damage.

Starfy starts with three yellow hearts on the Touch Screen that represent how many wrong moves the player can take before a Game Over (up to two, not three as having no hearts doesn't allow for one more chance). On the top screen there are icons for Snips, Ronk and Papes with Snips representing scissors, Ronk representing rock, and Papes representing paper. Likewise on the Touch Screen there are three icons; scissors, rock and paper with a picture of Starfy on the floor on them.

Each turn, two of the icons on the top screen will be raised at once and a third icon will be raised last, which represents the correct move that the player should try to beat to deal damage. For example, if the last icon was paper, the player can beat it and deal damage by touching the scissors icon. The Terrible Trio have ten health points, and for each successful move they will lose two health points.

If the player is too slow to pick a move, an random icon will be chosen. If Starfy ends up with one heart left, then a message will appear from Moe telling Starfy to listen up, as one of The Terrible Trio "is always going to give away what they're doing" for not being too smart.

Voices in the Japanese version

In the Japanese version of The Legendary Starfy (Densetsu no Stafy Taiketsu! Daīru Kaizokudan), the narration "Jan・Ken" can be heard at the start of the battle, and during each turn. The narration "Pon" is also shouted out after Starfy makes a move. During the Japanese version of rock-paper-scissors (Janken) in Japan, Jan・Ken・Pon is often shouted out.

Additionally, exclusively to the Japanese version, Moe's voice can be heard on the 'advice from Moe' screen, like in two other situations in the game.