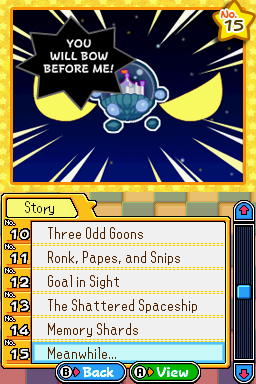 Viewing Meanwhile… from the Story menu

Meanwhile… (Japanese: あやうし! ランパ星, Watch Out! Planet Rampa) is the 15th Story cartoon in The Legendary Starfy. The cartoon takes place 'far, far away from the floating land of Pufftop...' in Planet Bunnera. Mashtooth is angry at the fact that The Terrible Trio still haven't caught Bunston. A Swabbie tells Mashtooth that according to 'the message', Bunston is in Pufftop and asks Mashtooth not to eat him (the Swabbie). Mashtooth replies that he has never heard of Pufftop, and that it sounds 'stupid and fluffy'. Mashtooth asks the Swabbies to get him more 'carrot nibblers' and says that he will 'show the prince who's in charge'. A Swabbie stands up to Mashtooth and says maybe they 'shouldn't be doing this' as it's 'not very nice' but Mashtooth punches him away for daring to question him. Mashtooth says that 'strength is everything' and that he has the power to take over the galaxy. He threatens to destroy Bunston's home planet if he does not bow before him.