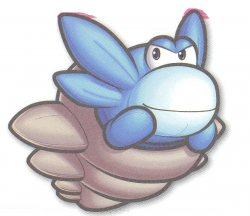 Bosses (Japanese: ボス) are a special type of enemy in the The Legendary Starfy series that can only be found through a boss door. They are normally found in the last ordinary Area, or the end of a Stage, though in Densetsu no Starfy, Sea of Sky has three bosses that Starfy must defeat before advancing to Pufftop. The Legendary Starfy also has some optional bosses. Five battles, which are Pufftop battles with Papes, Ronk and Snips and two battles with Konk are not found in the final Areas.

In the Game Boy Advance games, the player character is given five health bars for battling bosses instead of five hearts like in ordinary gameplay. The health icon also changes from Starfy's face to a star. If Starfy or Starly lose all of their health bars, they will be sent out the boss door and will lose one regular heart. Densetsu no Starfy 4 uses the health point system while The Legendary Starfy uses ordinary hearts, instead. In all of the games in the series, bosses contain a certain amount of health points for each form. In the Game Boy Advance games they start with 5 bars, in Densetsu no Starfy 4, they have a long health bar, and in The Legendary Starfy, they start with 10 bars.

In The Legendary Starfy, clearing the game unlocks an option from Moe's Case called Big Bossdown, where the player can fight all the bosses in succession except for the two secret bosses, Konk and Master Lobber. The player is timed and if Starfy or Starly finish under 9 minutes, the player gains access to the ??? (Stage 10).

In the first four games, there is an iconic sound effect for encountering a boss that is played at the beginning of the tune Confrontation with the Boss that also appeared in Super Smash Bros. Brawl for when the Starfy Assist Trophy is used in battle. This tune and the sound effect is not featured in The Legendary Starfy, which is also the first game in the series to use a different Boss Battle theme.

Like most characters and enemies, all of the bosses are present in the Toys/Picture Book or Trading Cards with a description.

Below is a table of bosses by game and stage. There is a separate table as well under a "final bosses" section that covers final bosses and their forms.

These are the final bosses of the story, with their forms listed separately.