The Famicom (Japanese: ファミコン), known in full as the Family Computer (Japanese: ファミリーコンピュータ) and abbreviated as FC is a games console created by Nintendo that was released in Japan in July, 1983. It was localized outside of Japan as the Nintendo Entertainment System (NES) that was first released in North America in 1985. 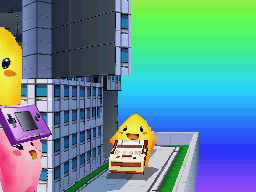 The Famicom makes a cameo appearance in Densetsu no Starfy 4 in the Nintendo Headquarters Special in the Stuff, where Starfy (or Starly for Starly's version) holding a Famicom pops out of the back of the building and walks left, meeting Starly/Starfy. 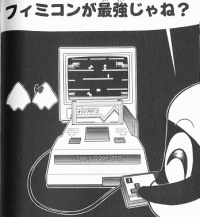 In the events of this chapter, Starfy and Starly fought over who had the best console. Moe convinces Starfy and Starly that both the "FS" and "Fii" are good consoles and they don't need to fight, but Moe then comments that the Fimicom is the best system.