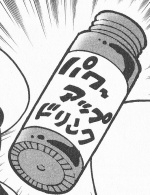 Starfy holding a Power Up Drink

Power Up Drinks (Japanese: パワー アップ ドリンク) are special drinks that appear in the sixth chapter of the first volume of the Densetsu no Starfy manga illustrated by Yumiko Sudō ("We'll Absolutely Meet Again Fii!"). They give power to whoever drinks them.

Gekojii owns boxes full of them. He is first seen using one of the Power Up Drinks to smash away some rocks that block the exit to his cave. Gekojii leaves this one behind, making Starfy cry because he expected him not to litter. When Starfy and Moe make it to Gekojii's room, Moe greedily takes away many of them before being stopped by Gekojii for looking at a photo of his grandson.

It is revealed in a flashback that Gekojii had used one of the Power Up Drinks to try and climb a waterfall to rescue his grandson but he failed. When Starfy tries, he successfully climbs the waterfall thanks to his Star Spin and two Power Up Drinks and finds Gekojii's grandson asleep in a cold cave.