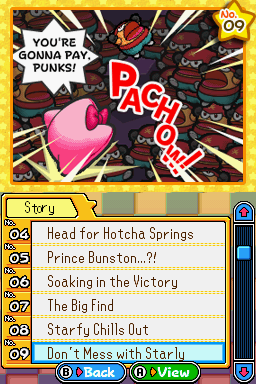 Viewing Don't Mess with Starly from the Story menu

Don't Mess with Starly (Japanese: スタピーも大かつやく?, Stapy Outstanding Performance?) is the 9th Story cartoon in The Legendary Starfy. Back in Pufftop, while Starfy, Moe and Bunston are travelling, The Terrible Trio with many Swabbies ask Starly to hand over Bunston. Ronk asks where Starfy is, to which Snips replies 'Huh? He's note there?!'. Snips believes this is The Terrible Trio's chance to 'go wild'. They frighten some Pufftop Guards but then Starly appears saying they're the 'creepfaces who made a mess of Pufftop!' She punches a Swabbie away, says that she is going to 'haunt their bad dreams' and then beats up The Terrible Trio and many Swabbies. The Terrible Trio sarcastically say Starly's 'too tough for us' and Snips asks if she saw a 'floppy-eared kid around as I've got a special present for him'. Starly is not fooled by this trick, but accidentally reveals the whereabouts of Starfy, Moe and Bunston by saying out loud that they are safe in Sogwood Forest. The Terrible Trio run off, and Starly says 'Uh-oh. Why did I say that?! I better call Starfy. I have to tell him...' Starly holds an item resembling a Pearl in her hand and then apparently teleports to Sogwood Forest. Moe is very angry to hear that Starly told them and Starfy, Starly and Moe run off. Starly warns them to be careful.