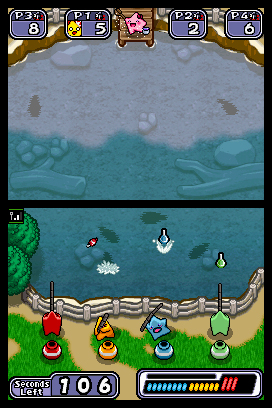 Fishing Derby, with Starly on screen.

Fishing Derby (Japanese: ツレツレ ウーオ, Tsuretsure Ūo) is a minigame in The Legendary Starfy. The goal is to catch as many Unu as the player can before time runs out.

When Starly appears on the scene, a big 'fish' appears. It turns out to be Moe, and he gives a treasure resembling a Konpeitou from Densetsu no Starfy 4 which gives out a lot of points.

Black (regular) Unu: 1 point (found the closest to the player)

Red Unu: 2 points (found the second closest to the player)

Gold Unu: 3 points (found the farthest to the player)