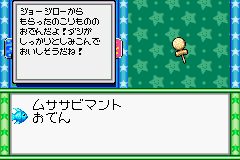 Viewing the Oden on the Items screen

The Oden (Japanese: おでん) is an item in Densetsu no Starfy 3, found in Lobber's Cave (Stage 1-3). It is a piece of oden with a cross shaped stick pierced through it. In the story, Gaganmo was hurt by Konk. He/she dropped his Oden and had his/her Giant Flying Squirrel Mantle damaged, so Gaganmo asks Starfy, Starly and Moe to find the Oden and a new Giant Flying Squirrel Mantle. Gaganmo teaches Starfy the Glide ability so that he can Glide over to a door that leads to the items.