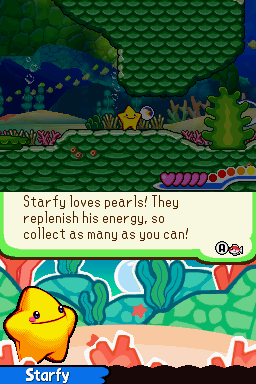 Pearls (Japanese: しんじゅ) are common items that appear in the The Legendary Starfy series. They can restore health, and with the exception of Densetsu no Starfy, can also be used to buy things within the games.

There are two sizes of pearls, including small pearls and big pearls (Japanese: 大しんじゅ) which are worth five small pearls.

Use in Densetsu no Starfy

The pearls only go up in this game as there is no shop. There is a picture in the game that adds characters as Starfy collects more pearls. The picture will be complete after the collection of 9999 Pearls.

Use in Densetsu no Starfy 2

Just like in Densetsu no Starfy, players can collect up to 9999 pearls, but they can also buy costumes (Stuff) and Photographs in Lovely's shop.

Use in Densetsu no Starfy 3

Once again, players can collect up to 9999 pearls. This time they can also get pearls at the end of an Area when clearing it using the Goal. A player can get 50 pearls, 20 pearls, 5 pearls, or no bonus. Costumes and music can be bought in Jojiro's shop.

Use in Densetsu no Starfy 4

Pearls can be used in Maniankou's shop to purchase costumes and a larger maximum total hit points for the player, after completing the level Maniankou appears in. They also always restore 1 health point if collected by Starfy or Starly in this game. After the player beats Degil at least once music can also be bought. In addition to pearls, this game also introduced pink pearls which add to the pearl count but slightly restore the SP bar instead of Starfy or Starly's HP.

Use in The Legendary Starfy

In The Legendary Starfy, a limited number of Stuff can be purchased from Moe's Case from the pause menu. The most expensive being the Galactic Hero's Outfit, which costs 9999 pearls. As with previous games, a maximum of 9999 pearls can be held by the player. The player can also purchase a random toy from the Toys section of Moe's Case after defeating Mega Mashtooth at least once for 5 pearls. This is the only method of obtaining them. There are 127 toys in total.

Five special pearls, known as red pearls (Japanese: あかいしんじゅ) have to be collected by Starfy for Herman in the "Herman's Red Pearls" Side Quest. They do not add to the pearl count. They look like pink pearls from Densetsu no Starfy 4.