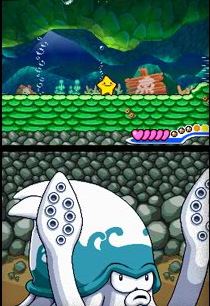 The story begins with the kid knocked out on the sea floor, Big Squiddy sleeping beside them, and Starfy yelling as him and Moe fall and land on Big Squiddy. He recovers and grabs the kid, and takes off with him. Starfy and Moe begin to swim after them. Starfy enters a door, and meets Mermaid on the other side. She's very excited to meet Starfy, and guesses that he's going on another adventure and offers her help. If he recognizes any of the shells Mermaid has, he can tell her all about the stuff he did.

Then Mermaid introduces the Mermaid Gossip, and wishes Starfy good luck on his adventure. In the next room, Starfy finds treasure and Moe's Diary is inside.

Looks like Starfy and I got swept up into another adventure! Sheesh! I tried to stop him! Well, as long as he checks the Abilities screen from the pause screen and listens to my brilliant ideas, I think we'll be all right.

Later on, Starfy meets up with Moe. Unfortunately, Moe wasn't able to catch Big Squiddy and he still has 'that kid who fell from the sky'. Moe tries to persuade Starfy into heading back up to Pufftop, but immediately notices a shiny crystal Starfy is holding onto. Starfy explains that he found it after that kid crashed through the roof of Starfy's room, and he thinks it belongs to them, but Moe still insists on going back to Pufftop.

But, to Moe's dislike, Starfy is set on giving back the crystal to the kid, and Moe begrudgingly accepts, but he wants to leave for home after. Moe leaves and Starfy follows him.

Here, Starfy meets Herman, who's worrying about something. He asks for Starfy's help in retrieving his pets, or Coddies, from a Goblup that swallowed them. Starfy suggests that he can hit them with his Star Spin, and goes for the Goblup to free Herman's Coddies. Use your Star Spin to attack bad guys or break barriers. Just don't get too dizzy! After releasing the Coddies, Starfy heads back to Herman, and thanks Starfy for his help. Starfy then asks about Big Squiddy and a 'floppy-eared kid', and luckily, Herman has seen the two! Herman tells Starfy about a shortcut behind him, and he probably catch up with them. Herman wishes Starfy good luck. After leaving, Starfy picks up Treasure and finds Herman's Diary inside.

Today, I saw a strange little guy get dragged away by Big Squiddy. The kid was dressed like he was from outer space. far out! I hope he's OK. I could help...But I can't leave my Coddies.

Surfacing from the water, Starfy meets Herman again, and this time he's really worried. He's lost five 'super-rare' pearls, and he doesn't find them, he can't by treats for his Coddies. Starfy asks why he can't feed the Coddies regular snacks, and Herman is shocked. Feeding his Coddies regular food is cruelty to Coddies. He asks for Starfy's help, and Starfy accepts. After finding the pearls, Herman thanks Starfy and rewards him with a secret place that he found. He marks it on Starfy's map.

Starfy meets up with Moe, and he tells him that he caught a whiff of treasure, and his nose says it's nearby, and he tells Starfy that 'if he sees any funky cracks in the walls,' he should use his Star Spin. Starfy then says that saving the 'space kid' is more important than treasure, and this introduces "Moe's Sniffer". Starfy finds treasure, and it's Beachwear. Before leaving, Starfy meets Globerto. He travels the world making the best maps. If Starfy ever loses his way, Globerto can help with his maps.

Starfy encounters Fat Cat and Kit Fish. Starfy asks them if they've seen a 'long-eared kid' run by, but before Fat Cat can respond, Kit Fish is extremely excited to see a prince, and she asks tons of questions. She's cut off by Fat Cat calling her out on her manners. Fat Cat has seen the one Starfy describes, but then he notices the crystal Starfy has, and he's seen something like the shards around the area as well.

He tells Starfy that Big Squiddy had one and about the temperature fluctuating from hot, to cold, then hot again.

Kit Fish gets an idea, she tells Starfy that there's 'a wise man with a white mustache' near, and he should see him. She tells him that he lives in Hotcha Springs, on the other side of Gluglug Lagoon. But in order to get to him, Starfy has to go through Big Squiddy. She tells Starfy to be careful.

After escaping Big Squiddy, Starfy finds a Guard Uniform inside a treasure chest.

Starfy and Moe encounter the kid again, and they tell the two to get away from them. Moe tells them that they're not the bad guys, and that they just came back to give them the crystal that they keep dropping. The two introduce themselves to the kid. Moe asks the kid if they're okay, and the kid is fine, so they calm down. Moe asks the kid their name, and the kid respond with 'Bunston', but their mind is still blank.

Starfy wants to help Bunston get his memories back. Moe agrees, and Bunston apologizes for burdening them, but it's alright with Moe, since they don't have anything better to do.

Moe brings up the transformation that Bunston did to Starfy earlier, and Bunston mentions that he feels a connection with Starfy, and he can transform Starfy using his Monstar power.

Bunston transforms Starfy into Monstar, and Starfy clears a path by burning the weeds in front of them.

After clearing the path, Bunston brings up the crystal. it brought back memories, but he doesn't know what the shard is.

Starfy thinks that the shard broke off of something, and Bunston agrees with him. He comes to the conclusion that if they found what it broke off of, they can connect the pieces together, and Bunston's memory will come back. Bunston gives Bunston's Collection as a gift.

In a hidden room, you'll find treasure that contains a Calling All Challengers pamphlet.

NOTES #4 - "Calling All Challengers" - A pamphlet by Fat Cat

Come one, come all! if you dare challenge a sumo master who laughs in the face of Big Squiddy, come see me!

In order to enter this room, you need to find a key hidden in a bubble.

When you enter the room, ou find Kit Fish, who says Starfy will be more famous if he wrestled her dad. Starfy agrees.

Starfy wins, and Kit Fish marks Secret 3 on the map.

Starfy enters the boss room, and Starly appears in front of everyone. She tells everyone about the current state of Pufftop, and she wants to know what's been going on with Starfy and Moe. Starly notices Bunston and Moe explains what's been going on.

Starly lets Starfy know that he can call on her any time to get help from her.

Starfy battles Big Squiddy and defeats him. Starfy obtains a shard, and the shards that him and Bunston have fused together.

Moe tells the two that their next location is Hotcha Springs, where they'll look for Old Man Lobber.

NOTES #5 - Herman's Diary: "Big Squid" Boy, that was scary, man! I was just grabbed by that same giant squid! I thought I was done for, but then I pressed back and forth on the D-Pad to wriggle out of his grasp just long enough to escape!

NOTES #6 - Elite Pufftop Guard's Journal: "All of a Sudden"

GUARD'S LOG: Pufftop was attacked at 0900 hours by a group of unidentified enemies. Prince Starfy chased them off, but it's possible that they may return, so we will remain on high alert. More as further events unfold...

Starfy clears a path by burning the weeds in the way, using Monstar. After he finds Bunston's journal.

It seems that I have the power to transform things... I don't know where this power comes from. And when I'm with Starfy, the power is really strong! Maybe Starfy can help me master this power...?