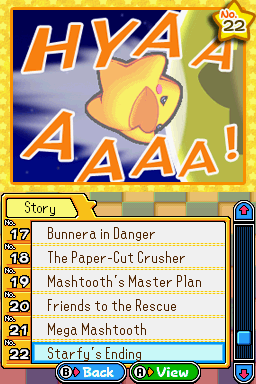 In it, Starfy pushes The Moon at Mega Mashtooth, causing a large explosion. The stolen powers from the Bunnerans begin to fall from the sky and return to Bunston and the Bunnerans. The fallen Bunneran Soldiers happily stand up again and they gather around Bunston, cheering for him, proud of the young prince.

Starfy catches Moe's eyes as he falls from the sky, so Moe jumps up to catch him on top of his clam. He is badly hurt however from the battle with Mega Mashtooth. Many people crowd around Starfy, worrying for him and Moe asks if he is OK. A Bunneran Soldier asks who Starfy is, and Bunston replies, telling the Bunnerans of his great adventure and how Starfy helped him in a strange language. They reply, "Wow! So this is the Prince Starfy? We've heard so much about him!" Starfy is hurting from the battle and the Bunnerans reply "We have to help him, fast!" Two Bunnerans use their powers to transform into butterflies and heal Starfy's injuries.

Moe tells Starfy not to go easy on them, but Starfy loses to all three members of The Terrible Trio on purpose. Moe jokes 'Starfy! I'm onto you, kid!" for losing on purpose. Starfy smiles and Moe laughs, saying "That's Starf for you...". Moe looks back on everything and says "good thing it all worked out", "everything's nice and quiet again", "almost as quiet as Pufftop". Moe says it's about time they set off for home and Starfy agrees. They both smile happily.