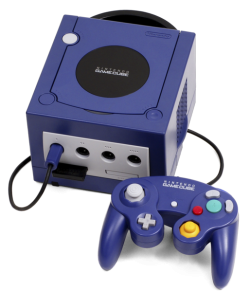 The Nintendo GameCube (Japanese: ニンテンドーゲームキューブ), shortened as the GameCube and officially abbreviated as the GCN (NGC in Japan) is Nintendo's sixth generation home console, released in 2001 in Japan and North America and 2002 in Europe and Australia. It is the successor to the Nintendo 64 and the predecessor to the Wii.

Donkey Konga was released on this console; which features Becky's version of The Legendary Starfy series Title Song in the Japanese version.

Though no games in The Legendary Starfy series were released for the GameCube, it is possible to play the Game Boy Advance games via an add-on called the Game Boy Player (Japanese: ゲームボーイプレーヤー).

In Densetsu no Starfy 3, by using multiple Game Boy Advance Game Link Cables, minigames can be played with up to four players on the Nintendo GameCube. [1][2] 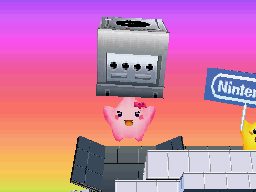 Starly holding the silver GameCube in the Nintendo Headquarters Special 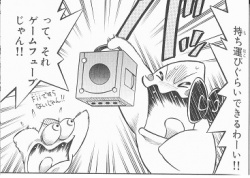