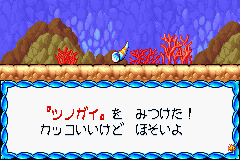 The Dentalium Shell (Japanese: ツノガイ, Tsunogai) is an obtainable item in Densetsu no Starfy. It is a colorful tusk shell.

On the quest to find Herman's missing home, Herman gives Starfy a Key that unlocks the keyhole leading to the next room of Lobber's Cave. In the next room, Starfy finds the tusk shell in a small body of water. Starfy returns to show it to Herman, but the tusk shell is too small for him. Herman then teaches Starfy how to use his Star Spin so he can break blocks and search further.

Later in the story after clearing Lobber's Cave and finding Herman's real home - the Pretty Shell, the Kettle and the Dentalium Shell block the flow of water of a face fountain in Coral Reef. Starfy must break them with his Star Spin to raise the water level and progress through the level.