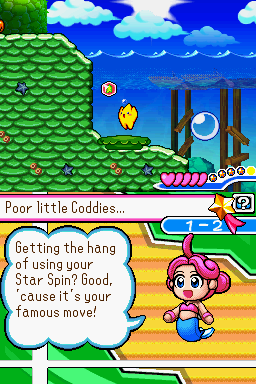 Red pearls (Japanese: あかいしんじゅ) are five special pearls in The Legendary Starfy. They look like pink pearls from Densetsu no Starfy 4. They only appear as items in Gluglug Lagoon, (Stage 1-2) as part of the "Herman's Red Pearls" Side Quest, in which Starfy must find them for Herman. As Starfy must give them to Herman, they do not add to the pearl count.

In the Side Quest Herman says that they are "super-rare". If Herbert doesn't find them, he "can't buy the good treats" ("high-class fishie food") for his Coddies. He insists that his Coddies "can't eat just regular snacks" because it would be "cruelty to Coddies".