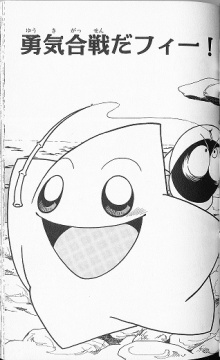 Courage Wars Fii! (Japanese: 勇気合戦だフィー!, Yuuki Gassenda Fī) is the fourth chapter of the second volume of the Densetsu no Starfy manga illustrated by Yumiko Sudō.

Starfy and Moe are seen fishing. Starfy managed to catch something, but it turns out to be a seashell. Moe laughs, but Starfy seems to like it and says it's pretty. Moe takes the shell from him, Starfy quickly takes it back as Moe notices a small cave. They both look inside the cave and see a lot of fish swimming inside the cave's water. Moe immediately plans to fish in there, but Starfy points at a sign saying the cave is dangerous and that entry is prohibited. Moe ignores Starfy's warning and goes inside. Starfy chases him. Moe starts fishing and immediately catches a giant spiky fish. Starfy attempts to attack the fish, but the fish smacks him and jumps back in the water.

Moe is whimpering in fear, but then Starfy sees him and asks Moe if he was hiding. Moe tries to prove to Starfy that he is 'brave', and jumps on to a tall rock in the middle of the water with several 'steps'. Starfy didn't want to be beat in this 'test', so he jumped on to the rock with Moe, only for at least two spiky fish try to attack them. They are soon saved by Ootaruika's tentacles. Ootaruika angrily points at the warning sign that Starfy and Moe ignored. This time both Starfy and Moe insist that they were fine, but Ootaruika calls them idiots and throws them out of the cave. Moe starts to yell at Ootaruika as he leaves, but then he slips and falls in the water where many spiked fish are ready to bite him. Starfy throws rocks at the fish to try to save Moe, but it's no good, so Starfy jumps in the water and tries to get their attention. The fish start to chase Starfy instead and Starfy tells Moe to get out of the water. Starfy attempts to jump to the rock Moe was on earlier, but then he realizes he's trapped in seaweed. Starfy believes the fish have got him, but then he sees that the fish are actually biting Ootaruika's tentacles. Ootaruika pushes the fish away and takes Starfy out of the water. Moe tells Ootaruika that he was courageous and Starfy agrees with him. Ootaruika stares at them angrily. He's still mad at them for not heeding his warning and tosses them out of the cave again.

Soon Ootaruika is seen going inside his house. Starfy and Moe appear next to the door. Soon they hear Ootaruika talking about his day. He said he met two idiots. Starfy and Moe start to run inside in anger, but they are stopped when they see Ootaruika crying near a picture of his son. Moe tells Starfy they must go. Starfy agrees. Ootaruika turns after hearing something, but all he sees is the seashell Starfy caught earlier. Starfy and Moe are then seen swimming. Moe asks Starfy where his seashell is. Starfy says he lost it (though it is highly likely he gave it to Ootaruika). Moe gets angry and starts to chase him.