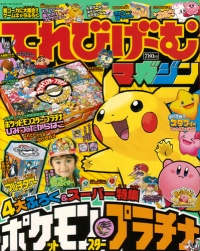 The first issue of the Video Game Magazine, focusing on The Legendary Starfy as one of the featured games

Starfy's Adventure redirects here. For the CD, which has a name that translates to Starfy's Great Adventure, see Starfy no Daibōken.

Video Game Magazine (Japanese: てれびげーむ マガジネ, Television Game Magazine) is a series of Japanese mooks published by Enterbrain marketed for young children as the main audience. The first issue was launched on November 7, 2008. The original Famitsu DS+Wii editorial board was responsible for the creation of the magazine but as of 2012, the magazine is independent from their control.