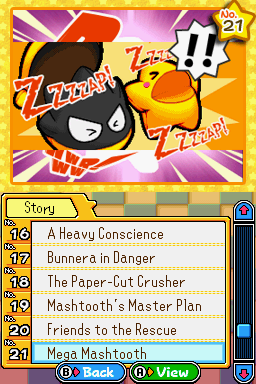 Mashtooth says "not... over... yet...", shocking the three. He begins to stand up and uses his sniffing attack to inhale Bunston, hoping to absorb his power to become unstoppable. Bunston tries to resist, but Mashtooth picks him up and drops him down his throat, swallowing him.

Bunston falls inside of Mashtooth's body, and Mashtooth's heart begins to thump loudly. Mashtooth starts to transform into a much more powerful form — Mega Mashtooth.

Starfy is lying down facing the ground with his eyes closed, but other people including The Terrible Trio, Starly, Bunston, Old Man Lobber, encourage him to get up, filling him with the power of friendship. The power invoked by Starfy's friends is so powerful that a large aura surrounds Starfy, allowing him to fly into space and attack Mega Mashtooth face to face. 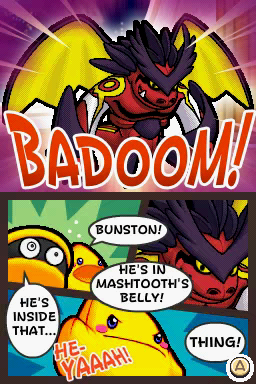 The scene with the speech bubble pointing at Starfy
Retrieved from "https://www.starfywiki.org/index.php?title=Mega_Mashtooth_(cartoon)&oldid=20879"
Category: