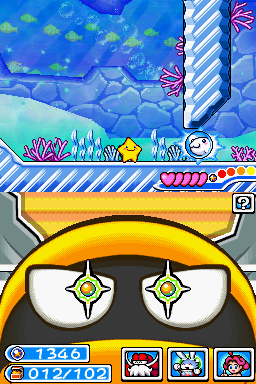 In Area 2 of Planet Bunnera, 'Modo's Cosmic Express' - it is revealed that Modo was the original owner of the initial Monstar transforming stone but he gave it away. Bunston then gave it to Starfy. Much earlier in the game, in Area 3 of Gluglug Lagoon, Starfy jumps into Big Squiddy's left large tentacle to save Bunston, and Starfy is transformed into Monstar. It is assumable that Starfy and Bunston used the energy of the Monstar Transforming Stone to undergo transformation, but this is not explicit.

When Starfy obtains a Transforming Stone, a short tune of the same name plays.

After a Transforming Stone has been acquired, Starfy can morph with Bunston by entering a thought bubble with the relevant power inside, although when Starfy first transforms into Monstar, he simply jumps into Big Squiddy's left tentacle with Bunston to transform.