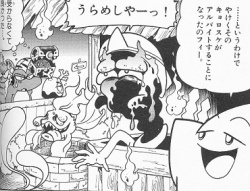 Moe and Hirara acting in the haunted house

The cinema (Japanese: 映画館) and haunted house (Japanese: お化け屋敷) are locations in the Densetsu no Starfy manga illustrated by Yumiko Sudō. They appear in the sixth chapter of volume two, I Want to Appear in the Movies Too Fii!. The haunted house is found behind the cinema. 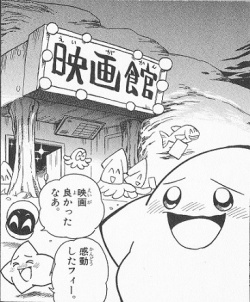 The cinema (Japanese: 映画館) is a cinema located underwater, which various characters visit. It is located in front of the haunted house. Starfy and Moe went in to the cinema to watch a film and they commented that it was a good movie after leaving. Later, after Starfy and Moe left, they saw a notice which said the cinema was holding an actors audition but they originally weren't aware that part of the notice was missing and actors were actually being recruited for the haunted house.

Thinking that they were taking part in a movie audition, Starfy and Moe entered the actors audition for the haunted house to find that many hopeful actors were already there. The host of the auditions, Hirara tells them that they will be auditioning as her partner but Hirara reveals a terrifying face that frightens most of them away, apart from Starfy, Moe, a Treasure Monster, a Sangoro, Buirun and a Gabuppa.

The remaining characters waited on two platforms, with Starfy, Buirun, Gabuppa on one platform and Moe, Sangoro and the Treasure Monster on the other. They had to fight each other to decide who gets the part and if anyone fell off their platform, they would be disqualified. Additionally, a character had to take out all of the opponents on their platform before moving to the other platform. Although Buirun defeated Starfy, he was disqualified because he jumped to the other platform without taking out Gabuppa.

Starfy and Moe became the two remaining characters and although they were expecting a fight, Hirara told them it was time for a speech test instead.

When Hirara prepared a piece of paper with urameshiya (うらめしや) on it (this is a phrase like 'I envy you'; うらやましい stereotypically said by ghosts). Starfy and Moe began to wonder what kind of 'movie' it was, with Starfy suggesting a horror movie and Moe suggesting an action movie. This left Hirara confused. When Starfy and Moe showed her the notice, Hirara seemed embarrassed and apologized to them, telling them that the notice seems to have been torn.

Hirara placed the rest of the notice on; which revealed that actors were being chosen for the haunted house (Japanese: お化け屋敷) behind the cinema. Starfy and Moe were horrified to hear this but Moe decides to take part anyway, with Starfy joking that Moe was desperate to get a part-time job. 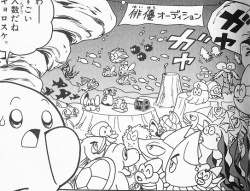 Starfy, Moe and many hopeful actors at the haunted house's actors audition
Retrieved from "https://www.starfywiki.org/index.php?title=Cinema_and_haunted_house&oldid=33856"
Categories: