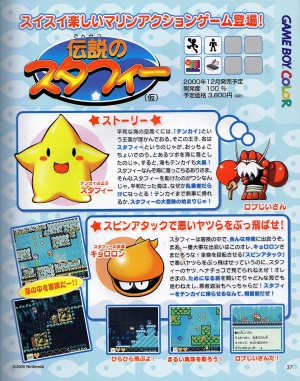 A scan from the Nintendo Spaceworld 2000 guidebook, detailing information about Densetsu no Starfy when it was under development on the Game Boy Color

Planning on this game began as early as November 1995 with the work of Hitoshi Yamagami (Nintendo) and later Yasuhiro Minamimoto (TOSE) as untitled balloon/bubble pushing games involving indirectly pushing a balloon, and later moving a Nintendo character in a bubble. At some point the game was changed to control the object manually, as the game was considered not very fun.

Development on this game continued through 1998 and as such. At some point, both a starfish and a jellyfish were considerations for changing the bubble to a marine creature to match the theme of the game. Nintendo encouraged TOSE to rework this game for the Game Boy Color. In 2000, the Game Boy Color version underwent a period of promotion, where details about the game began to surface on the official Japanese Nintendo website. A trailer of the game was presented in 2000's Nintendo World event, amongst highly anticipated titles such as Luigi's Mansion and Super Mario 128.

As the game was approaching its release for the Game Boy Color, it was again canceled and rebuilt for the Game Boy Advance which was only going to be released in 2001. Starfy was apparently going to be purely a starfish, until he was made to fall down from the sky, which supposedly invoked a community policy for TOSE to reply that Starfy is neither a star or a starfish when asked.

There are various differences between the Game Boy Color version and the final Game Boy Advance version still noticeable on Nintendo of Japan's page about the trial demo. For example, the official logo and some of the character artwork and names of characters were changed later in development, including Kyorosuke (Moe) who was originally known as "Kyororon". It should be noted however that the Nintendo Space World 2001 trial demo for the Game Boy Advance was promoted with the old logo used during the Game Boy Color period. There was also character artwork for the Game Boy Advance version from early in development, which although different (with the exception of Moe), were not final.

Although the Game Boy Color game was cancelled, a trailer of the game (right) is still available as a QuickTime movie on the official Japanese Nintendo website. At least one remaining clip of the game from the Nintendo Space World 2000 event also exists on the Internet. The video below (left) is an extract of footage filmed by Donald Allen; who was the creator and webmaster of the defunct website NintendoNation (formally NintendoNext).

In the Donald Allen footage, the two conversations Starfy has, can be interpreted in English as follows.