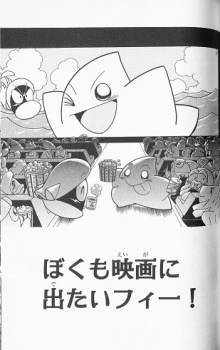 I Want to Appear in the Movies Too Fii! (Japanese: ぼくも映画に出たいフィー!, Boku mo Eiga ni Detai Fī!) is the sixth chapter of the second volume of the Densetsu no Starfy manga illustrated by Yumiko Sudō. It features the most appearances of characters in the manga series.

Starfy and Moe are seen exiting a cinema. While they are walking, Starfy notices an advertisement for a movie that is holding auditions for actors. Starfy and Moe get excited about and run straight to the location.

Starfy and Moe arrive and many people are already there. Starfy soon realizes he's already lost Moe. Moe is greedily looking at a treasure chest. Soon a spotlight points at a female fish that is covering her face. Everyone looks at her and cheers. She is then introduced as Hirara, the host of the auditions. Hirara tells them that they will be auditioning as her partner. Moe and many nearby sea creatures blush in excitement. They say Hirara is pretty and would like to see her face. Hirara slowly moves her fin away while asking if they really think she's pretty. She reveals a terrifying face that causes many of the auditioning people to run away in fear.

As Hirara evilly laughs, Starfy, Moe, and two other auditioning actors are the only ones remaining. Hirara then smiles normally and apologizes for scaring them. She's looking for someone brave for the role. Hirara starts to sweat nervously once she sees there are four actors remaining. The actors are then introduced and reveals the other two actors as Sangoro and Buirun. Hirara places the four in two platforms. Starfy and Buirun on one, Moe and Sangoro on the other. They must fight each other to decide who gets the part. Anyone that falls out of the platform will be disqualified. Starfy complains about her method of choosing an actor, and then gets knocked out by Buirun immediately.

Buirun heads for the other platform to take out Moe and Sangoro, but Hirara tells him that he's disqualified because he went to the other platform without taking out all the actors on his platform. Buirun claims he did. Hirara disagrees and points at a palm tree. The palm tree actually turns out to be Gabuppa. Moe looks at Gabuppa nervously, but suddenly hears a familiar voice coming from inside Gabuppa. Starfy comes out from Gabuppa's leaves, rips the leaves off, and throws Gabuppa out of the ring. Starfy becomes the winner of his platform. Moe starts to hug the treasure chest he saw earlier, but Hirara tells him it's one of the actors. The chest is then introduced as Treasure Monster. Treasure Monster claims that he truly does have treasure. This causes Moe to tie up Treasure Monster closed and throw him out of the ring while putting a sign on him claiming the treasure as Moe's. Moe stares at Sangoro like he's ready to take him out, but Sangoro is at the edge of the platform and shortly jumps off. With Moe victorious, he now must face Starfy. Despite their friendship, Starfy and Moe prepare to give it their all. Hirara then claims that it's time for the speech test. Starfy and Moe realize they won't be fighting after all. Hirara tells them they both did good and gives Starfy a piece of paper. The paper says urameshiya (うらめしや) on it (this is a phrase like 'I envy you'; うらやましい stereotypically said by ghosts). This leaves Starfy and Moe confused and asks Hirara if they're really in a movie audition. Hirara smiles in confusion. Starfy then shows Hirara the sign he and Moe saw. Hirara reveals that part of the sign was missing. She adds the rest of the sign, which reveals that it was actually an audition for the haunted house behind the cinema. Despite the confusion, Moe decides to do it anyway.