Old Man Vern (Shida-jiisan in Japan, literally Old Man Fern) is an old Seawee who appears in The Legendary Starfy. He first appeared in level 4-2 and has a large walrus mustache. He appears in two Side Quests, both in Sogwood Forest. He is also a good friend of Old Man Lobber.

"The Lost Treasure Chest" (No. 11) is the first Side Quest he appears in. He tells Starfy about a treasure he hid deep below the surface of a pond. Unfortunately, the pond is filled with poison water. Luckily, the pond is also filled with Capfish, whose caps absorb the poison. Starfy must use the protection of the Capfish's caps to swim down and retrieve the treasure. If Starfy succeeds, Old Man Vern will give Starfy the treasure. The treasure is access to Area Secret 2.

In the second Side Quest, "The Mushroom Farm" (No. 12) Old Man Vern is angry about the local Mushrews eating all of his mushrooms. Starfy must eliminate all 15 Mushrews within 00:60. If Starfy succeeds, Old Man Vern will tell Starfy of a secret area filled with mushrooms and pearls. The player is then granted access to Area Secret 3. 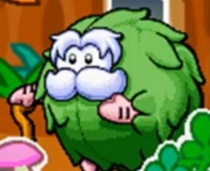