Saint Nak is a Santa look-alike reindeer that only appears in Densetsu no Starfy 3. In the game, first he loses his Sack of Presents in Stage 4-1, so Starfy and friends have to find it. Starly finds it.

Later in Stage 4-2, his Sack of Presents gets ripped slightly so Starfy has to get the Sewing Set from Rockin' Baa. In return, Saint Nak gives Starfy the Reindeer Band. 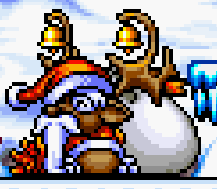