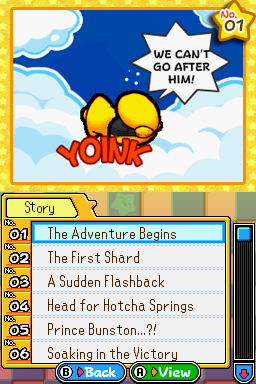 Viewing The Adventure Begins from the Story menu

The Adventure Begins (Japanese: オープニング, Opening) is the 1st Story cartoon in The Legendary Starfy. It is played at the beginning of the game immediately after starting a new file.

In it, the floating kingdom Pufftop and the prince of Pufftop, Starfy are introduced for the first time. One day, Starfy was awakened by an 'alarming sound' when a mysterious visitor (later revealed to be Bunston) crashed through the ceiling of Pufftop Palace. Starfy tried talking to Bunston, but Bunston was 'too bewildered to answer'. The Terrible Trio crash through the wall and begin to drag Bunston away, until Starfy attacks them with a Star Spin, letting Bunston escape and leaving The Terrible Trio in pain. Starfy's best friend Moe calls Starfy's name, asking what was with all the noise and who the person in the 'spaceman getup' was. Moe reveals that Bunston escaped off the edge of Pufftop into the ocean. Starfy decides to rescue Bunston, but Moe grabs Starfy and tries to stop him, warning him of a huge 'Squid Monster' and calling him 'nuts'. Despite this, Starfy manages to fall off the edge with Moe who is holding on to Starfy. They both fall down into the ocean and Starfy's big adventure begins.