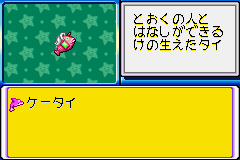 Viewing the Mobile on the Items screen

The Mobile (Japanese: ケータイ) is an item in Densetsu no Starfy 2. During the events of Resshi Lake (Stage 9-5), the Mobile was dropped by Puchi Ogura #9. According to its item description, it is used to talk to people from far away, although Starfy and Moe never use it this way.

Starfy later finds Funazou, who tells him that the mobile phone is a red seabream model, ♥808 Pink Pearl Type (Japanese: マダイモデル♥808パールピンクタイプ), which is apparently a rare model. Funazou explains that it is a limited edition colored for girls (Japanese: ガールズげんていカラー) and there are only three of these in the world. Funazou says that Lovely has one.

Reference in Densetsu no Starfy 3

In the Jungle (Stage 5-2), Moe asks Moon if he can borrow her Mobile to call Echigyoya, so he does. The sprite of the Mobile appears inside of a speech bubble from Moe. Moe finds out that the phone number is not currently in use.