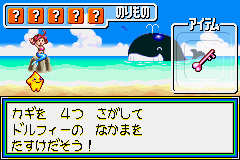 The Heart Key in Densetsu no Starfy, visible on the Pause menu

The Heart Key (Japanese: ハートキー) is a pink key in Densetsu no Starfy and Densetsu no Starfy 2. The end of the key is shaped like a heart due to the look. It is one of four special keys. The other three are the Spade Key, the Club Key and the Diamond Key. They are all based on the four French playing card suits.

In Densetsu no Starfy, the Heart Key is found in the Sunken Ship. It was originally under the possession of Boctopus. It is one of four keys required to open Sunken Ship's prison cell and rescue Dolchina and Dolshi.

In the story, Dolchina and Dolshi are trapped inside a large prison cell by Boctopus. Sometime later Boctopus patrols the room. He is angry at the fact that their sister Dolfy is coming to help. Boctopus leaves to hide away the keys, but carelessly drops the Heart Key right outside of the prison cell. When Dolfy arrived inside of the Sunken Ship, she picked up the Heart Key and tried to open the cell to no success. Dolfy learns that only all four keys may open the cell.

Dolfy gives the Heart Key to Starfy and Moe and hopes that they will find the other three keys to rescue her siblings.

In Densetsu no Starfy 2, the Heart Key is found in Ogura Castle (Stage 11-4). It is one of four keys required to unlock the blue cage Moe was trapped in after he fell for an illusion of Ruby created by Ogura. It is found through the top-left door. Starfy must navigate a room with the Kigurumi.