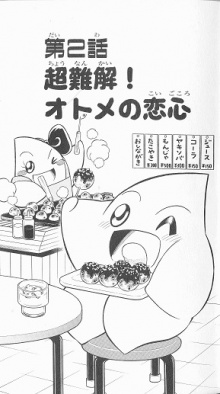 Super Difficult! Love of a Young Girl (Japanese: 超難解！オトメの恋心) is the second chapter of the Densetsu no Starfy R manga.

The chapter begins with Starfy and Moe playing with tarot cards in a dark room in Pufftop Palace and studying an astrological chart. Starfy wonders whether the chart could predict his relationship with Mattel. Suddenly, a "medium" appears who is looking through what first appears to be a crystal ball. A closer inspection shows that the crystal ball is simply just a dumpling, and the medium is actually Starly in disguise, who is playing tricks on Starfy, yet Starfy and Moe do not realise this. Starfy is angry at the "medium" for being tricked, but he still cannot see through Starly's disguise. The "medium" is cooking dumplings, and Starfy remarks that he would like to eat one. Starly serves Starfy some dumplings, and to the shock of Starfy, engraved on the dumplings are the kana "マテル" (Materu). Starly finally reveals herself to Starfy, to his own frustration.

Starly shows Starfy a shopping bag, in which Starly gives Starfy a suit. Starfy appreciates the suit, and Starly thinks that Starfy looks great in it. Starfy later decides to put on his "otaku" suit, which consists of a 'head handkerchief', spiral glasses, a striped jacket and a shirt. Starly shouts at Starfy, but remarks that she would love to see somebody like that holding a catgirl doll, like the people of Akiba.

Starfy rushes out of Pufftop Palace while some female Pufftop Children make fun of Starfy. Starfy furiously takes off the suit, while Starly observing Starfy laughs at him outside of one of the windows of Pufftop Palace. Later, Starfy is playing cards with Moe, but is still very angry at Starly and knocks Moe out of his chair from his own frustration. Starfy decides to play a trick on Starly for once, so he decides to walk up to Starly's room. While Starly is looking at a photograph, Starfy decides to quietly approach Starly and appear to be friendly, but then decides to slap Starly in the face. Starly reacts to this, and throws Starfy out of the window, shattering the glass. Later, Starfy is sitting on a tree stump with Moe, where he is covered with plasters, bumps and bruises. Starfy and Moe find an unknown character reminiscent of Maniankou, who has a bag full of catgirl dolls. Starfy decides to attack him for one of his dolls, but feels sorry for what he has done after he stands up again in a wounded state. Starfy apologises to the character, who offers to give Starfy one of his dolls. Starfy tells him about Starly, and brings him to Starly's room with a pair of roses back in Pufftop Palace. However, the chapter ends when Starfy is angry to find that Starly now has a crush on Prince Coral. Starly is now keeping much merchandise around Coral, and appears to be watching a program on television. 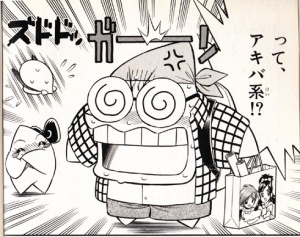