From Starfy Wiki
(Redirected from Characters)
Jump to navigationJump to search 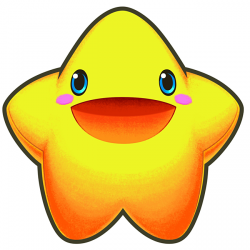 Artwork of Starfy from The Legendary Starfy, the most iconic character in the series

Characters (Japanese: キャラクター[1]) is a blanket term in The Legendary Starfy series referring to Enemies, Bosses and Friends that Starfy and Starly encounter on their adventures, or Starfy and Starly themselves.

Most characters can be added to the Toys feature by encountering them or in the case of Enemies that can be defeated, defeating them with a Star Spin. The Toys feature is otherwise known as the Picture Book (Japanese: ずかん, Zukan) or Trading Cards (Densetsu no Starfy 3).

Characters who are not included in the Picture Book/Trading Cards

There are a few characters that cannot be added to the Picture Book or Trading Cards. These are listed below. Entries marked with 'only' mean that they do appear in the relevant feature in other games.

There are various listings of characters on the Wiki.