Kachiwari-sama are unbeatable enemies that only appear in Densetsu no Starfy 3. They appear to be giant machines that are much larger than Starfy and Starly. If Starfy or Starly uses Star Spin or Shooting Star ability to drop a Strawberry on to a moving bowl of kakigōri dessert produced by Kakippe, a giant hand will appear at the end of the bowl's path, and Kachiwari-sama will throw the dessert into its mouth. This allows Starfy or Starly to quickly jump on to its head and reach new heights. If Kachiwari-sama 'eats' Starfy or Starly, they will be released but will lose one health point. Like Biggunikku (which are trapped in a small cavern), Kachiwari-sama appears to be trapped by ice.

According to Kachiwari-sama's Trading Card description, it is considered a guardian of its remaining kind. Moe asserts that Kachiwari-sama probably enjoys shaved ice every day. 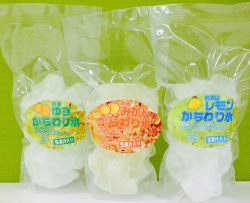