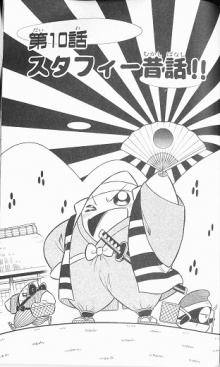 The chapter begins to tell a story of an old man (Moe) and an old woman (Moe), with the old man washing clothes in a river, similar to the beginning of the Japanese folktale Momotarō. Starfy floats across the river along with a peach and Starfy bangs his head against a rock, causing a big bump. Moe picks up the peach and Starly and Moe say they are going to eat it. Starly and Moe decide to bring up Starfy and call him "Hostarou" (Japanese: 星太郎).

Oni from Onigashima appear in the village that get along well with the villagers. Hostarou (Starfy), gets out a sword and puts it down again and Starly puts some small round objects into his hand. Hostarou tries to eat them using a stick with Kiritanpo on it. Hostarou walks away with a bag full of peaches (presumably having bought them from the Peach Shop).

A text bubble appears above Hostarou with a pheasent, a monkey and a dog. A dog comes behind Hostarou and asks to join him. It is revealed to be a small Chihuahua which Hostarou finds 'somewhat unreliable'. Hostarou finds Mattel with a Shiba Inu and they agree to swap it, so Hostarou walks around with the Shiba Inu. Hostarou is interrupted by Coral who has a large Tosa and he asks if they can swap dogs, so he does. The Tosa starts talking to Hostarou and Hostarou runs away.

Hostarou reaches the coast and sees Onigashima in the distance. He finds a signboard that says to be aware of sharks. Hostarou doesn't have a boat to get across but he finds someone resembling Starly with bunny ears and two front teeth build him a boat and she tells Hostarou to use it, so Hostarou thanks the 'rabbit'. Hostarou thinks he's lucky the boat was readily available and he begins to ride it but then the boat splits in two. Hostarou falls into the water and the sharks aim for Hostarou. Hostarou has an idea of jumping across the backs of the sharks like a white rabbit so he jumps off the backs of fish from larger to smaller sizes including a shark, a tuna fish, a swordfish, a suzuki, a sea bream, a Japanese horse mackerel and a clownfish.

Hostarou falls into the water so he starts swimming until he finally reaches Onigashima. He is shocked to find the Dragon Palace Castle in front of him. Hostarou comes to a bridge and finds that an ugly duckling has become a swan. Hostarou is then shocked to find that aliens have appeared from another planet and Hostarou says that there isn't a fairy tale about that. Eventually, Hostarou reaches hideout of the Oni. He opens the door and gets out his sword but the Oni hit him on the head with a spiked club similar to a morning star, leaving Hostarou with bumps on his head. The Oni corner Hostarou and chase after him.

Meanwhile, back in the old man (Moe) and old woman's (Starly) home, they open up the peach and find the genuine Momotarō and they then live happily ever after.