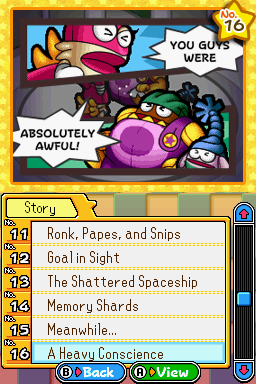 Viewing A Heavy Conscience from the Story menu

A Heavy Conscience (Japanese: ジャンケンポンのはんせい, Jankenpon's Regret) is the 16th Story cartoon in The Legendary Starfy.

After Starfy defeats Snips in Skydye Heights, The Terrible Trio return to their spaceship to regroup. Snips says that Ronk and Papes were 'absolutely awful' and asks if anyone were hurt, to which Ronk and Papes replies 'they healed us' (thanks to Ruby and the Rainbow Droplet). Snips is shocked that their 'enemies' would heal Ronk and Papes and 'patch them up'. Ronk and Snips begin to sniff up (possibly crying) and reply 'that was so nice'. The Terrible Trio begin to feel guilty about what they have done; beating up 'innocent weaklings' such as Bunneran Soldiers and Pufftop Guards just because Mashtooth told them to. However, Ronk and Papes are frightened that if they don't follow Mashtooth's orders, he'll "crunchify" and "smushimise" them. Meanwhile, Starfy and friends knew they had to go on and explore the S.S. Logwater that Snips thought she saw a Shard in earlier in Stage 6-4 (Snips and Tricks).