List of glitches in the Game Boy Advance games

Below are a list of glitches in Densetsu no Starfy.

Beating Bankirosu while losing at the same time

In a boss battle with Bankirosu if Starfy performs a Star Spin on Bankirosu in a certain way it's possible to bump into the spikes and also damage Starfy. If Bankirosu and Starfy both have one health point, the player can defeat Bankirosu while failing the boss fight at the same time. Bankirosu's 'defeated' animation is played, but it appears that Starfy is sent back outside of the boss room before anything else can happen. If Starfy returns to the boss room, Bankirosu will be there to fight Starfy again with full health points.

If after beating Ogura, the player performs the glitch when Bankirosu is meant to give Starfy a treasure chest, the treasure chest is knocked out of Bankirosu, but the player will be sent back outside of the boss room before it can be obtained.

Beating Bankirosu while losing at the same time 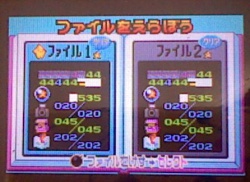 The player's data for both files on the File Select screen may suddenly become corrupted. On the Title Screen, the game may prompt the player that there is a Suspend Save for an invalid file and freeze with static playing in the background if it is loaded.

The data for both files may look as follows. 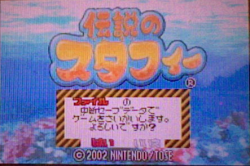 An invalid Suspend Save prompt. Note that the file is called 'File (blank space)' with a barely visible blue bar above it

Ending the demo sequence with the Balloon about here causes incorrect playback of the next demo and allows the player to take control, as long as it is the area of Coral Reef where Starfy normally swims past Moe and around the room.

The demo glitch is a bug that allows the player to take control of the game from the attract mode and skip to any stage from the second stage (Coral Reef). This is due to incorrect playback of the Coral Reef demo where Starfy swims past Moe and around the room. This is caused by ending the attract demo with the Balloon when Starfy's at around the same x-coordinate as the Balloon.

The attract mode ends when Starfy hits Moe with a Star Spin, initiating a conversation with Moe. When the player exits the conversation and takes control, the game is considered to be "completed". By default the player has access to every stage, all vehicles unlocked, the ability to break the Seal Blocks blocks and the ability to get treasure. The save file will have a star next to it, meaning that the player is able to see the post-game title screen.

This glitch, combined with the Suspend Save glitch have been used in tool-assisted speedruns of Densetsu no Starfy to beat the game within about 3:30-6:30 minutes.

In Undersea Temple, Starfy can rise on top of some green platforms that are found underwater. If the player presses the Down button while swimming above one from below, Starfy will suddenly thrust upwards. The extent of which Starfy is pushed upwards can vary.

Video of the green platform glitch

Causing the Imadame glitch to happen

The Imadame glitch allows Starfy's HP to underflow from 0 to 255 hearts by getting caught by Imadame during the 'no hearts' sequence. The glitch is exploitable in the bottom-right room of Pufftop. The player must have access to the Catfish Boat and the ability to break the Seal Blocks. Through the second door past the Catfish Boat, there are Imadame and a Nubble at the top-left corner of the room. The Nubble allows Starfy to lose all of his hearts and lose another one due to getting caught by the Imadame during the 'no hearts' sequence.

Since values for heart bar graphics (memory address: 03000F7A) greater than 05h are invalid, the game displays a glitchy mess on the screen when it tries to draw Starfy's health. For certain values (e.g. 248-255 hearts), Starfy, the treasure chest at the end of the room and enemies, including the Imadame and Nubble are made invisible due to the glitchy graphics, while other values keep them visible on the screen. 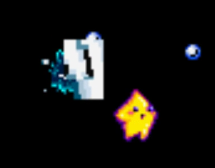 Rarely in the Boss battle with Ogura's final form, corrupted graphics may appear for Ogura when he retreats into the background. The glitch is speculated to occur when Starfy hits Ogura on the first frame he is vulnerable when doing a laser attack. 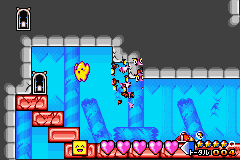 The first room of Pufftop corrupted by the Suspend Save glitch

This is a glitch that involves corrupting the player's Suspend Save data. When the player opens the Pause Menu the game creates a temporary save. If the player resets the game, a message will appear asking the player whether he/she wants to resume the save game data.

If the player presses Start to open the Pause Menu in another location when they already have Suspend Save data, and then resets the game exactly 36 frames after pressing Start, the Suspend Save data may become corrupted.

The results of the glitch tend to vary. The exact reasons why are unknown, but it tends to vary by location and room.

This glitch, combined with the Demo glitch have been used in tool-assisted speedruns of Densetsu no Starfy to beat the game within about 3:30-6:30 minutes. It has not been confirmed to work on a real console.

Below are a list of glitches in Densetsu no Starfy 2.

In Area 5 of Resshi Lake (Stage 9), on the second map some lag will occur if the player is quick to have Starfy Star Spin while an Arumonto is on the screen. The lag will go away after a few seconds but the glitch is repeatable if Starfy enters a door and returns to the map to have the Arumonto respawn.

Video of the Ball glitch, performed with the 'Pig' pit, the 'Apple' ball and the 'Honey' ball

Before clearing the area 5 of Large Tree's Forest (Stage 5-5), Numan will drain the water in the second map, meaning that a door at the top-right corner of the map is inaccessible under normal circumstances.

Starfy is meant to use another door and then use his Star Spin on a cork to fill the room with water again.

However, by using a difficult to perform technique, Starfy can run up, jump, and bounce up from the damage of a Komorin (bat/bee like enemy) to enter the door without filling the room with water.

According to a TASVideos forums thread, it is possible to perform a sequence break using Stone Statues.

This glitch occurs in Area 9 of Torrent's Waterfall (Stage 10). To get to this stage, the player must have unlocked the upgraded Sukebon. On map 2, there is a Dokazun past two spiked balls and four rows of breakable bricks. If the player gets past the bricks so that the Dokazun can see Starfy and then performs a Star Spin above it when it is close to the wall, it will move through the wall and become stuck in it. If Starfy then performs another Star Spin, it is possible for the Dokazun will fly up the wall and off the screen with a high velocity.

Getting the Dokazun to fly off the screen

Very rarely, in the Lobber's Cave boss fight, when Konk is defeated, instead of him spinning into the background, Konk will stretch thin and dissipate. The game then freezes. It is not known what causes this glitch.

In the battle with Ogura's final form, if Starfy gets swallowed by Ogura when Starfy is in the invulnerable stage from getting hit by a previous attack, when Starfy is spit out he will stand near the center of Ogura's mouth instead of taking damage and being pushed downwards.

Video of the Ogura swallow glitch (glitch begins at 5:15)

In Stage 8-4 (Pufftop), there is a minor floating platform glitch that can be performed in room 3. This is a large room that scrolls vertically. If Starfy jumps on to one of the floating platforms when there isn't much space above it, he may jump for no apparent reason.

Video of the platform jump glitch

In Stage 10-6 (Torrent's Waterfall)'s boss room, rarely when jumping up to the area with Puchi Ogura #10 his text box will appear at the bottom of the screen before shortly moving to the top of the screen. The cause is unclear.

In Stage 3-3 (Turtle Turtle Land) after the player catches Kamekkojinan and Kamekkoimouto and returns to Moe, he will celebrate that they are finally 'caught', until they will run off with Kamekkochounan after he invites them into the door.

Later, Moe gets angry and shocks Starfy. If the player presses the Start button to end the conversation early while Starfy is 'shocked', he will remain shocked until the Area is cleared. The sprites of Starfy being shocked do not change when Starfy uses Star Spins or becomes Dizzy. If after opening the Pause Menu with Start, the player resets the game and resumes it via Suspsend Save, the file will be loaded with Starfy still shocked.

If the player resets the game after saving via the Mermaid and loads the file without loading the Suspend Save, Starfy's sprite will return to normal. Clearing the stage and entering the next will also return Starfy's sprite back to normal.

Video of the shocked Starfy glitch 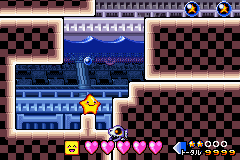 A Sukarudon stuck in a wall

When revisiting Stage 8-5 (Pufftop) after beating the game, there is a Sukarudon between two walls, with the left most wall being very small height and width wise, in the room where Squirt #4 used to be. If the player is sent to this room from map 9 (accessible through the bottom-right most door from the main room with the Imadame), the Sukarudon may be stuck in the right-most wall until Starfy moves up a bit. 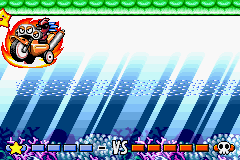 Below are a list of glitches in Densetsu no Starfy 3.

In the boss battle with altered Ogura, it is possible for Ogura to perform an attack with no health points left.

In Densetsu no Stafy 3, in the time between when Starly or Starfy engages in a cutscene/dialogue-related trigger that induces a change in music and when the cutscene/dialogue actually starts, the music currently playing transitions to the next song by getting quieter until the next song actually starts. In this instance in 10-3, the Imadame activating while the music was getting quieter causes the music to stay quiet until the next cutscene that changed the music occurs.

Video of the disappearing objects glitch

In Stage 7-3 (Gabun Ocean Trench) and before clearing the area, the player is meant to solve a stone platform puzzle on the seventh map.

The player is intended to use a bell to alternate between Starfy and Starly, with Starfy pushing the stone platforms in for Starly to jump on.

Possibly due to an oversight, Starly can stand on a tiny space next to the stone platforms while the stone platforms are wedged between walls (not pushed out). Combined with Starly's Wall Jump ability, this allows the player to bypass the puzzle entirely.

Video of the exploit

Prior to completing the game, in Stage 4-4 (Crushed Ice Alpine), in room 6 The Jellato Sisters can be found frozen in ice. If Starfy pushes the ice block against the wall in a certain way, it will bounce back and send Starfy flying upwards at a high velocity.

In Stage 4-6, in the third map, if Starfy saves using the Mermaid right next to him, and the player resets the game and loads that save file, then Starfy will appear at the other Mermaid's location across the map, immediately activating the other Mermaid. This also occurs in Stage 8-6 in the fifth map by saving with the first Mermaid there. These Mermaids were fixed in the v1.1 revision.