Pinglings (Deka-minions in Japan) are purple, goggle wearing penguins which only appear in The Legendary Starfy. They always run or attack in a straight line and occasionally slide on their stomachs while on ice in order to enhance their speed. They may also stand on top of one another to make themselves taller in order to make it harder for Starfy to progress. According to Moe, their favorite weapons are snowballs and they are very independent. 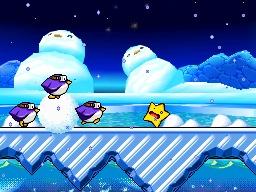 "These are everywhere in Chillydip Cove! Their favorite weapon is a snowball. Pinglings serve King Ping. But don't tell them that-- they're very independent." (#023)