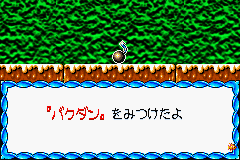 Obtaining the Bomb in Densetsu no Starfy

During the events of Sunken Ship, a wall closes in, blocking Starfy from Moe. Earlier Starfy found a Pickaxe and a Scoop, but neither of them worked at breaking the wall. Starfy throws the Bomb at the wall and it explodes and successfully breaks it. The blast shocks Moe, but he proceeds to reunite with Starfy. Just then, however, Boctopus finds Starfy and pushes him away from Moe into the boss room.

Bombs are found in Large Tree's Forest, where they are surrounded by multiple boxes that block Starfy's path. In the story, in level 3 (the first level to feature the bombs), Kamone is tired of work, so he asks Starfy and Moe if they can detonate the bombs underneath him to destroy the boxes and clear the way. Starfy must light the fuses of various bombs by hitting them with a Star Spin. When the bomb explodes, it must destroy the boxes below it. If the bomb isn't in the area of the boxes, Starfy can move it around by Swimming. If a bomb explodes in the wrong area, Starfy must speak to Kamone to start the room over again with the bombs in their original positions. Kamone later appears indirectly in level 4, where there is another section where Starfy must detonate bombs.

Bombs are also found in Torrent's Waterfall (Stage 10-4), where six were detonated by Moe. According to a Chonmagyo, about 500 were planned to be detonated. If Starfy returns to the level after defeating Ogura the six bombs are replaced with six large Pearls. 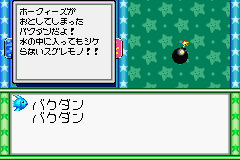 Three Bombs are found in Misty Town (Stage 3-2), where they were dropped by the Hokwi Group. They teach Starly the Crawl ability so that she can find them. When Starly and the Hokuizu return to Sir Hokwi, they reward the player with the Commander Hat Accessory. Starly uses one of the Bombs to rescue Starfy from the pile of knives and chairs.